Zombies is the name for animated corpses. Zombies are dead humans or undead monsters who are brought back to life through means of vodoun or Voodoo and witchcraft like a priestess of voodoo magic in ancient times sometimes a witch doctor during the ritual in order to do their bidding like in the old movie in black and white, Night of the Living Dead. They are trapped in the same body forever.

Ghoulia Yelps and her sister Moanica Yelps are the zombies in Monster High. Other zombies in Monster High are Ghoulia Yelps's boyfriend, Sloman "Slo Mo" Mortavitch and Neighthan Rot, on his father's side. Most zombies can't speak proper English, instead they let out groans and moans, meaning they speak "zombie". Some people can understand what their saying but for those who don't some zombies carry around translators so other monsters can understand them. Neighthan being only half zombie is most likely the reason why he can speak proper English. Zombies are also very slow moving as well, and they tend to slouch.

In generation 2 we are introduced to a new group of zombies led by Moanica D'Kay. Other zombies are the same but she has some special abilities, like she can speak to other monsters and she can walk normally, something that other zombies aren't able to do.

Zombies are mostly human in appearance, as they are animated human corpses. They tend to have blue, grey, or green skin. Many of them tend to slouch, and they have their arms slightly raised but hands down. In Neighthan Rot's case even a bit of his muscle under the skin is viable around his mouth. They also have bags under their eyes, their eyes also some times cross or look unfocused.

In later volumes, they are shown with more ripped-up clothing. They also have spots on their bodies to look more rotten.

Neighthan Rot Half zombie half unicorn

Don of the Dead 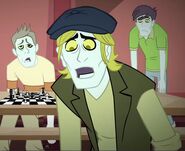 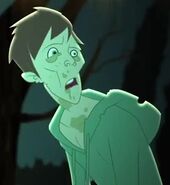