Start a Wiki
Znap is a new character introduced in "Electrified". He is created accidentally when Frankie tries to release extra electricity that has built up in her after protecting Twila from a storm. He appears to only know how to say his own name.

In English, he is voiced by Ben Diskin .

He is fairly small, only just bigger than Frankie's hand. He has blue stripes and lightning bolts covering his yellow body. He also has spikey yellow and blue hair.

Znap is included attached to the Electrified: High Voltage Frankie Stein. When her arm is pressed down both he and Frankie light up.

Two other versions of Znap are also included with the Electrified: Monstrous Hair Ghouls Twyla and Clawdeen in pink and purple respectively. 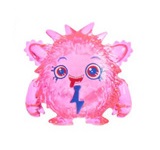 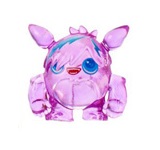 Znap included with Clawdeen
Add a photo to this gallery
Retrieved from "https://monsterhigh.fandom.com/wiki/Znap?oldid=349393"
Community content is available under CC-BY-SA unless otherwise noted.