Wydowna is portrayed as a Power Ghoul by the name of Webarella, and wears a glittery white halter neck top with red spiderweb designs, paired with a plain red skirt. Her skirt is fastened by a simple white belt with her Skullette at the front. Her boots are silver with holes, shaped like a spiderweb. The boots are studded, while the heels are red. She accessorises with six assorted bracelets, one on each arm: She has black and silver bangles and a red studded bracelet on her right hands, while she has red and white bangles and a silver studded bracelet on her left hands. She wears a red, fingerless glove on her highest left hand, and has a silver, double-stranded chain (likely a whip) on her belt. Her earrings are red, star-shaped spiderwebs. Her makeup consists of monochromatic silver eyeshadow, and cherry red lipstick with her black fangs showing. The fringe of her hair is rolled backwards to reveal a widow's peak, and the rest of her red hair is elaborately coiffed.

She comes with an extra outfit, which consists of a white, sleeveless sheath dress with a graphic design of red, black, and silver explosions and comic book sound effect phrases; a pair of shimmery silver long pants; a black spiderweb belt; and a pair of black pumps with red spiderweb patterns. Her pet is a black fly with white eyes, translucent white wings, a red bow, and a red mouth. 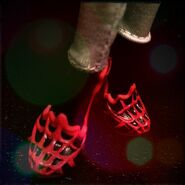