Wydowna Spider is a 2011-introduced and all-around character. She is an anthropomorphic spider, specifically the daughter of Arachne, and a student at Monster High. Due to her six arms, Wydowna is one of the most productive monsters in existence. Multitasking is not a problem to her, although it can suddenly burn her out. She is skilled in both sewing and drawing, which has made her a close associate of Clawdeen Wolf fashion-wise and Ghoulia Yelps comic-wise.

In English, Wydowna is voiced by Erin Fitzgerald.

If Wydowna could be summarized in few words, they would be "productive" and "slightly mischievous". She loves finding things to keep her busy and distracted and, due to her six arms, Wydowna is one of the most productive monsters in existence. Multitasking is definitely not a problem for her, although it can suddenly burn her out.

She is a fierce geek with a wide range of interests, the most predominant being her love for comic books. She is definitely intellectually gifted, especially in the literary area, and she does showcase her intelligence in her expression, as she speaks wisely and in a complicated way, as seen by others. She's also an ultimate fashion lover, and her spider heritage makes her spectacular at sewing, though her true passion can be found in drawing and sketching. In fact, she even has her very own comic book series, drawn and written by herself.

Bursting with equal amounts of creativity and sass, Wydowna is also just as naughty as she looks, being a very sly monster that is almost always focused on her own projects and never really a joiner in school activities. In fact, she can mostly be seen climbing walls and hanging on spiderwebs. She is completely aware that she is intimidating to some monsters and seems to purposely make herself even more intimidating, dressing aggressively and, just as a tease, letting her "spider side" out, exhibiting a lot of spider behavior, making an effort to be creepy, even though she is very passionate about the protection of her race and the misconceptions established by the humans and other monsters. Despite this, she is very kind and definitely a good listener, always willing to lend a hand or six.

As a humanoid black widow spider, Wydowna possesses six arms, fangs and red eyes. Her skin is dark grey and her hair is long and deep red, she sometimes wears her hair in a ponytail. She has a slight widow's peak that is visible when her fringe is curled backward. She has two human-like eyes in front of her face, while above her regular eyes, she sports four red eyes on top of which eye, giving her six eyes in total and she also has black fangs. Her civilian form is a black shirt with tiny red graffiti all over it. White skinny jeans accompany her legs. She wears red polka-dotted high-heeled shoes on her feet. She also wears red spider web-shaped earrings, red and silver bracelets, and one red wrist-high glove.

In Greek mythology, Arachne was the name of a gifted mortal woman who was incredibly gifted in the art of weaving, so much so that she challenged the goddess of wisdom and crafting Athena to a weaving contest. Ultimately, Arachne's tapestry was infinitely more beautiful and intricate than Athena's but displayed many scenes of how the Olympian Gods were cruel tyrants and enraged at the mortal. Athena ripped Arachne's tapestry to shreds and attacked the woman before transforming her into a spider when Arachne attempted to escape the Olympian's wrath.

Considering Wydowna's size and features, she could have also been inspired by horror films like The Giant Spider Invasion (1975), in which a giant spider invades entire towns.

Webarella is a fictional self-insert character in Wydowna's and Ghoulia's comic book. She is Wydowna's alter ego superhero persona, a crime fighter who swings through the skyscrapers on the search for evildoers, wielding her powerful web rope, teaming up with Mrs. Deadfast, Polterghoul, Voltageous, and Wonder Wolf to defeat the nefarious Cat Tastrophe.

She is the protagonist of the comic Power Ghouls and is completely molded off Wydowna herself. Only Webarella wears a super-suit from looks to abilities: a silver spiderweb leotard and a wrap-around red skirt, with knee-high boots, with stiletto heels.

As an anthropodian, specifically one of the spider kind, Wydowna has hold of several arachnid-related powers and abilities.

She is the daughter of Arachne, from Greek myths. Not much is known about their relationship.

Her profile states that she is BFFs with Clawdeen Wolf and Ghoulia Yelps. A screenshot of her iCoffin is included on her diary, showing texts of Clawdeen. She also appears to be friends with Twyla, due to her detailing about her in her diary.

Her pet is a large housefly named Shoo. 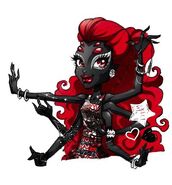 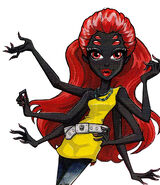 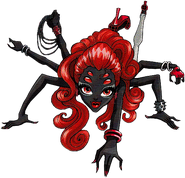 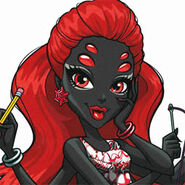