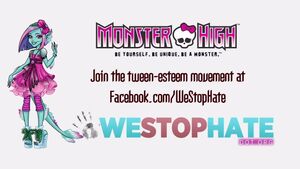 The WeStopHate is a USAmerican project to end cruelty among children that was founded by Emily-Anne Rigal, herself a victim of bullying. The project was launched in March of 2010 and has since enjoyed success nationwide. In 2012, the marketing team of Monster High approached WeStopHate for a partnership after the positive results from the partnership the previous year with the Kind Campaign.

On May 13, 2012, as the Freaky Fab 13 update of the month, Monster High posted a video about their partnership with WeStopHate, which also predicted there'd be a special webisode released for it much like the previous year had been done for the Kind Campaign. Over the next months, the social media accounts of Monster High began incorporating links to WeStopHate websites and accounts. The 13th of June too saw a Freaky Fab 13 update promoting WeStopHate and on July 19, 2012 "We Stop Hate" aired, starring Rigal's monsterfied persona, Grimmily Anne McShmiddlebopper. Further support from the side of Monster High materialized through a pro-social retailer partnership with Walmart. A WeStopHate banner was displayed at the end of the toy aisle in over 1,500 Walmart stores nationwide during the month of July. For each doll sold in those stores, online at Walmart.com, and at Mattel's online store, a portion of the proceeds were donated to WeStopHate.

Retrieved from "https://monsterhigh.fandom.com/wiki/WeStopHate?oldid=310636"
Community content is available under CC-BY-SA unless otherwise noted.