I'm made from the best parts of the best pets, so I bark like a dog, purr like a kitten, swim like a fish, have spikes like a dragon, and climb like a monkey, which means I can wear a spiked collar attached to a pink leash and still look good.

I like playing fetch with Frankie Stein although sometimes when she throws the ball her arm flies off and I have to bring that back too!

Watzit is a 2010-introduced and all-around character. He is Frankie Stein's pet simulacrum. Watzit is a creature made up of multiple parts, just like Frankie, but different in that his parts are all from different species. Watzit looks and acts most like a dog, but hates to be identified as such.

Watzit generally looks like a regular tan and brown dog, but he has stitches and some odd parts. He has dichromatic eyes, his right one is blue, and his left is green, just like Frankie. He also has wings, fins, and horns on his head.

Watzit is a creation of Mr. Stein, who started work on him a little under two months after bringing Frankie to life. Frankie Stein's Basic diary, August 24th Construction took about a week, after which Watzit was given to Frankie, with whom he immediately formed a bond. Frankie Stein's Basic diary, August 28th This was a situation that didn't just bring the both of them joy, but Frankie also had some help keeping herself together. While playing outside with Watzit one day, her arm fell of as she tried to throw a ball and Watzit brought back ball and arm. Frankie Stein's Basic diary, September 1st When the schoolyear started and Frankie no longer had as much time for Watzit, Watzit started to feel neglected. At one point, he snuck into Mr. Stein's lab and stole an item to bury it in the garden. Mrs. Stein saw him, though, and her husband and daughter about Watzit's behavior. Frankie resolved to get up earlier from then on so she'd have extra time for Watzit. Frankie Stein's School's Out diary, The 15th day of September

He is mentioned in "The Ghoul Next Door", when Mr. Stein is thinking of making a family pet, although his name is not stated at the time.

'Basic' Watzit is in a sitting position with his wings perked up.

SDCCI 2010 Watzit is a recolor of 'Basic' Watzit. Rather than in tan and brown, he comes in light grey and dark grey.

Watzit is one of the first three Friends plushies released and is packaged with Frankie Stein. 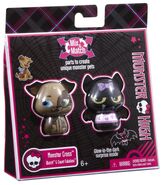 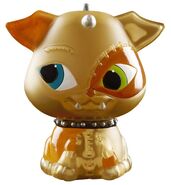 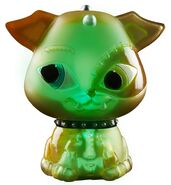 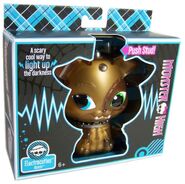 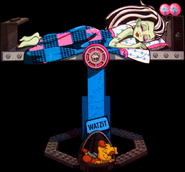 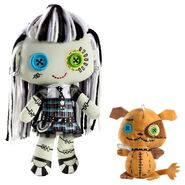 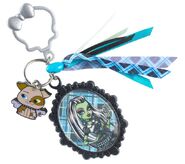