Wade Blue is the father of Lagoona Blue. He appears in the TV special Great Scarrier Reef and the Monster High Diaries book Lagoona Blue and the Big Sea Scarecation.

In the English version, Wade Blue is voiced by Piotr Michael.

He is a tall slightly chubby water monster with green and blue scales. He has a blue fin like beard, and scale like eyebrows. He has blonde hair with blue highlights, and green eyes.

Much like his daughter, Wade is a very laid back monster who likes to take things easy and go with the flow. However, he is fiercely supportive of Lagoona and her siblings, and is always eager to support her in her endeavours.

Wade is the father of Lagoona Blue, Ebbie Blue, Kelpie Blue, and Dewey, Squirt, and Tadpole Blue. He is also married to Lagoona's mother, a sea nymph. Lagoona Blue's School's Out diary 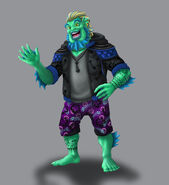 Add a photo to this gallery
Retrieved from "https://monsterhigh.fandom.com/wiki/Wade_Blue?oldid=346544"
Community content is available under CC-BY-SA unless otherwise noted.