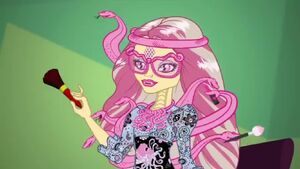 Viperine Gorgon debuted in the cartoon series in the Volume 3 TV special "Frights, Camera, Action!", which premiered on March 11, 2014. She is voiced by Yeni Alvarez in the English version of the cartoon.

As a dedicated but fresh makeup artist in Hauntlywood, Viperine can't afford too many mess-ups. While hurrying to the set of the new Vampire Majesty movie one day, she crashes into Scareantino, not only knocking the director out, but also spilling her equipment all over the ground. Getting Scareantino back conscious is not too difficult and he doesn't mind the accident, but Viperine still has to collect her stuff and get to the set in time. Coincidentally, a group of Monster High students witnessed the incident and they help her gather her material timely. Viperine gets to repay them shortly after when they want to speak with the actress Veronica Von Vamp, whom Viperine is assigned to. Her help, in turn, is rewarded too: she is rehired for the next Vampire Majesty movie, which means she gets to work with the friends she made since she crashed into Scareantino. Frights, Camera, Action!

Viperine is invited to the movie premiere of the latest Vampire Majesty entry. Welcome to Hauntlywood

Elissabat has to acquire experience as a regular high schooler for her next movie role, so Draculaura invites her to come spend a week as a student at Monster High. She and Viperine consider the idea a good one, but Elissabat has to go incognito if she wants to be treated as a regular high schooler. For this, Viperine works out a disguise involving a wig and glasses.

The plan proceeds well enough at first and Elissabat has a blast as a regular student. Though Draculaura invited her, the two have different schedules and only have a few moments to hang out. Having a reputation for being a terrible gossiper, Draculaura has to promise to keep Elissabat's secret when apart. Nonetheless, she can't keep prevent herself from telling Clawd. She insists he doesn't tell anyone else, which he agrees to. However, the presence of a famous movie star makes Clawd nervous and limits his performance potential during the next casketball match. While apologizing to the rest of the team, Clawd accidentally spills the beans about Elissabat.

It doesn't take long before the entire school knows that the new girl is actually a Hauntlywood celebrity and Elissabat soon has to run from her over-enthusiastic fans. Draculaura understands Clawd did not keep quiet as he had said he'd do and volunteers him to be dressed up in Elissabat's disguise and distract the crowd of fans. With Viperine's makeup artist skill, the plan is a downright success. Master of Hiss-guise

Add a photo to this gallery
Retrieved from "https://monsterhigh.fandom.com/wiki/Viperine_Gorgon/cartoon?oldid=349143"
Community content is available under CC-BY-SA unless otherwise noted.