Victor Frankenstein, also known as Sparky, is a 2014-introduced and cartoon-only character. He is a human who was alive 200 years ago. He enrolled at Monster High as part of a human exchange program when the school building wasn't even fully built. Most of his life was influenced by his status as an orphan, which gave him a strong desire to create his own family. He eventually created Viktor Stein and Viveka Stein, the parents of Frankie Stein, who herself created Hoodude Voodoo and the gingerbread boy, thus making Victor the ancestor of a long and varied line of simulacrums. He is somewhat a cartoon-only character and 2014-introduced, but he was mentioned by Viktor Stein in the book, Monster High.

He is voiced by Josey Montana McCoy in English.

Victor is a fragile being who suffers from the lack of family daily. Though part of the monster world, he is not given any benefit of the doubt due to him being a human, which only worsens his loneliness and single-minded drive to create life to keep him company.

He has short black hair with two small white stripes going through it. He has a blue eye on the right, usually covered by a monocle, and a green eye on the left. His skin is pinkish pale. He wears red pants, black shoes, black gloves, and a lab coat.

As an orphan, Victor has no biological family. He created his own descendants, Viktor and Viveka , at some point in his scientific career. Long after his death, they created Frankie Stein, who herself created Hoodude Voodoo and the gingerbread boy.

Frankie is the only family member he is shown meeting, but it can be argued he might feel closest to her. Victor was instantly ashamed and grieving when he saw Frankie dying, even before knowing she was his grandchild. Once he did know, Victor cried to the side while the other ghouls stood over Frankie. And once she was revived, he lovingly hugged her and returned to his own time. It is later revealed that Victor might have instructed Frankie's parents to not tell her about him until after she had traveled to his time, either to avoid a paradox or ensure that she would be there to get the lesson across.

Frankie also shares similar eye colors to Victor, but one of his eyes changed color when he went back in time through the time machine.

As an eccentric, impulsive, and headstrong individual, Victor was largely shunned in the early years of his life. The first person close to him was his mentor, Hexiciah Steam, who saw great promise in Victor if he were to get proper guidance. Ever since, the (Franken)Steins and the Steams have been on good terms.

In her SDCCI diary, Frankie mentions one Uncle Egor, who's not actually related but part of the family since a very long time ago. It's possible he and Victor knew each other.

In 1814, Victor is eager to show off his latest attempt at making a family during a heritage project in Hexiciah Steam's class. His demonstration does not go as planned and the class does little more than laugh at his attempt. Mr. Steam tries to help him and invites him for a talk about the moral aspects of creating life after class. Victor leaves angrily and is followed by Frankie, who travelled back in time by accident and was moved by his desire for a family. She encourages him not to give up on his dream, coincidentally revealing she is a simulacrum herself. When Victor starts questioning her, she quickly leaves and he follows her, thereby discovering Mr. Steam's time portal and finding his way to 2014. Intrigued by the technology now available to him, Victor immediately begins construction on a new simulacrum, Creature 4.0. It surpasses all his previous creations, but it also breaks out on a rampage inside Monster High moments after creation when it is enraged by a camera flash. He meets Frankie and her friends again, and together, they take the creature down. This, however, takes all of Frankie's energy. As she lies dying, what few words she has left make Victor discover that Frankie is his own granddaughter - the creation of two other creations he'll one day make. Remorseful and guilt-ridden over being responsible for his granddaughter's death, he, with the aid of Ghoulia and Mr. Steam, thinks up a way to restore Frankie's energy, using Hexiciah's rejuvenation chamber. Once completed, the two time- travellers bid their descendants goodbye and return to 1814, happy with what the future has in store. Freaky Fusion

Victor is based on the character of Dr. Victor Frankenstein, the titular character of Mary Shelley's 1818 novel Frankenstein the Modern Prometheus and a major recurring character in its subsequent adaptations. In the book, Victor was an aristocratic German-Swiss scientist from a wealthy family who funded his education at University. Victor is a genius scientist and becomes obsessed with finding a way to create his own life like a god leading him to spend two years developing his methods until he finally succeeds. Frankenstein creates a monster from stitched together pieces of a corpse (and in most film versions, with the power of lightning), but while he designed it to be beautiful, the monster is instead horrifying in appearance, leading Victor to abandon it.

Frankenstein's Monster and Victor go on to be enemies due to Victor's maltreatment of the creature and the monster wishing to get vengeance. Ultimately, Victor chases the monster to the Arctic regions of the North Pole, where the doctor falls through thin ice into the water, where he contracts hypothermia and dies of the cold.

Frankie, revived, wishes her grandfather to take care of himself before he returns to his own time period 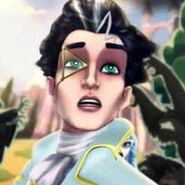