Venus McFlytrap is a 2012-introduced and all-around character. She's a plant monster and a student at Monster High. She is an eco punk girl who is the head of the Environmental Club. The MH Environmental Club Works its Magic Earth Day Love Sprouts, Thanks to Venus An ecology driven girl, she is a friend of the world and is loved by everyone, however she has built quite a negative reputation due to her mind controlling abilities.

Venus was originally voiced in English by Julie Maddalena Kliewer. By the reboot or Generation 2, she is now voiced by Cassandra Lee.

Her voice differs between feminine and nasally.

Venus's personality is hard to categorize as, in different forms of fiction, she seems to have different personas that are, to lack of better term, rather contrasting.

Sometimes, Venus will be described as chaotic, "loud and in your face". An avid party animal, Venus has energy to use and give, and, along with her punk style, she can be fun-loving and act rather crazy.

However, in most fiction, Venus is a down-to-earth girl, who lives pacifically her high schooler life, kind and whole hearted, although with just as much energy as her other persona, almost always in a hurry about the things she is passionate about, usually using terms such as ASAP to demand speed. However, she is a girl that sticks to herself and rarely shows emotion.

However, if there is one thing that remains constant between her two personas, it has to be her love for nature. Extremely doted to saving the environment, especially the flora, and gets extremely passionate about this, finding intolerable what the humans and fellow monsters do to the world, and how little they do to save it. She goes great lengths to save an issue that affects her, as a plant monster, more than anyone else, since nature is literally her home. She can usually be seen handing out fliers or organizing eco-friendly activities. However, she has few qualms about using her pollen of persuasion powers (see Abilities section) to control people to do small things like sort trash and tend to the flora surrounding the school. Because of this, fellow students are careful around her and at times avoid her. Venus is not always aware of this and when she is, she is more sad than sorry because it is her fellow students' disregard for the wellbeing of monsters like her that forces her hand in the first place. Venus does try to find other ways to spread her message, but so far, it is not very successful.

While there are problems for all students attending and staff working at a school that does not by default offers facilities to cater to their specific monster needs, plant monsters have it on average tougher due to different sustenance needs and a bigger sensitivity to the immediate environment. Venus is no exception, but is hesitant to ask for help if not prompted to it by another. Venus is overall a kind and generous monster who cares (caring).

Venus has bright green skin with hot pink and green hair, which is shaved on one side and is swept to the left. She has a tall, slim figure with pale green skin and teal blue eyes. She has multiple teeth protruding from her mouth and has vines entangled around her arms, neck, and ankles. Venus also wears an open short-top denim vest over her black shirt with pink and green floral imprints, pink black-green capris with a black skirt over it, and ankle-length high-heeled shoes with plant-like teeth at the soles.

Venus is a powerful plant monster with a lot of domain over other plant lives. Examples of her biological powers include:

The triffids were mobile carnivorous plants seen in Day of the Triffids, a book by John Wyndham, and several film adaptions of the same name. They are described as having no nervous system, therefore quite unintelligent and acting only on instinct.

Another prominent influence is the Venus flytrap Audrey II from Little Shop of Horrors, a comedy horror film originally released by Roger Corman in the 1950s, followed by the more well-known musical remake in the 1980s. Audrey II was discovered after a total solar eclipse by Seymore Krelborn, a guy that can't seem to catch a break. He convinces his boss to use the plant (who he named after his crush) to attract customers to the flower shop. It works immediately. However, Audrey II doesn't do so well and begins to wilt. Seymore tries to revive Audrey II and discovers the plant needs fresh blood. With Audrey II healthy and growing the flower shop and Seymore boom in popularity. When Seymore can't use his own blood to feed Audrey II, Audrey II reveals it can speak and demands more food. Seymore complies until he realizes Audrey II is actually from outer space here to conquer Earth by breeding copies of itself and brainwashing the inhabitants with some sort of psychic control.

Venus bears a heavy resemblance to Poison Ivy, also known as Pamela Isley, a DC comics character and long-time enemy of Batman. Like Venus, Ivy is very concerned about the environment and also is shown to have light mind control abilities, usually seen in the form of spores. In that regard, she also has many similarities to DC character Swamp Thing.

Her "pollen persuasion" mind control may also be a reference to the original Roger Corman version of Little Shop Of Horrors, in which Audrey II used mind control to make Seymour more compliant(as the original film was a low budget production, the plant itself barely moved). This ability was left out of the more famous 1980s version, but was again featured in Little Shop, a 1990s cartoon series based on the film.

Venus's mother has a habit of telling her to "Be a flower not a weed". Venus isn't terribly impressed by this. Venus McFlytrap's Between Classes diary Additionally, Venus has several brothers whom are several years younger than her. They look up to her and miss her when she's gone. Ghoulfriends Forever

Within the Ghoulfriends books, Venus is close friends with her dorm roommates Robecca Steam (who she affectionately nicknamed "Becs") and Rochelle Goyle, as well as fellow boarders Cy Clops and Wydowna Spider. There is a sense of understanding between her and Operetta, who is also capable of mind-controlling others, Venus McFlytrap's Between Classes diary and as a lifeform that's more dependent on water than most of her fellow students, she's close to Lagoona Blue and Gillington Webber. She, as shown in the TV special, Ghouls Rule, is also close to Rochelle Goyle. Since being fused together with Clawdeen Wolf, she has learned to be not only literally very close to her, but figuratively, too. 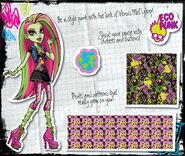 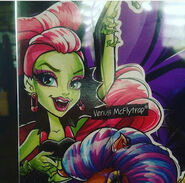 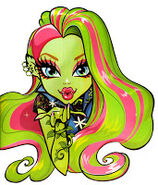 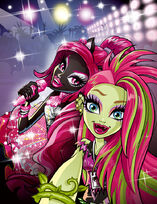 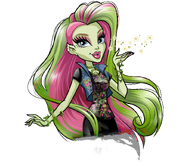 Add a photo to this gallery
Retrieved from "https://monsterhigh.fandom.com/wiki/Venus_McFlytrap?oldid=345726"
Community content is available under CC-BY-SA unless otherwise noted.