Vandala Doubloons is a ghost who attends Haunted High, a school for ghosts. She appears in the TV special Haunted.

She is voiced in English by Haviland Stillwell with a Cockney accent.

Being the daughter of a pirate ghost, Vandala considers herself a born adventurer, and the truth is that she is one. She's constantly on the lookout for adventure and excitement, either at school or on the high seas, and is very loud and dramatic as a result, almost to the point were she can be considered rather short of sanity, talking to herself and exaggerating every single of her actions, and is most of the time oblivious to most thing, completely focused and invested on her "adventures", no matter how small they are.

She owns her own pirate ship, the Salty Spectre, complete with a skeleton crew, and loves to take it out to sea and go exploring. Her only problem is that she gets seasick very easily, something she feels is not very conductive of a pirate captain. Despite this flaw, which she is very conscious about, she is a great leader and captain.

Vandala has soft sea-green skin and long teal hair. She has pale pink-orange eyes with whitish hues. Her pupils are a similar color to her eyes, but slightly darker. She also wears silver hoop earrings. Her right lower leg is missing, which is why she wears an artificial one, which is a translucent peg leg.

Little is known about her family, only that at least one of her parents is a ghost, specifically a ghost pirate.

She has a cuttlefish called Aye which is a constant companion to her, as well as protective. 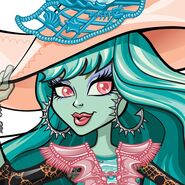 Add a photo to this gallery
Retrieved from "https://monsterhigh.fandom.com/wiki/Vandala_Doubloons?oldid=346874"
Community content is available under CC-BY-SA unless otherwise noted.