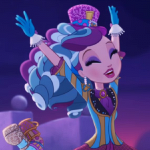 Hi! I'm Forbidden Nightmare and I'm from a southeast country known as Malaysia. In case you're wondering, Malaysia is a country with different religions. Like, Malays, Chinese (Like me), Indians, Sikhs and sometimes mixed religions. My country only released Monster High last year, so I won't have a lot of merchandise and dolls. I love being creative, writing stories and drawing. I wouldn't be caught dead without music and My Chemical Romance is my most favourite band. Sorry but I'm an anti-Belieber, an anti-Directioner and an anti-Twilight fan.

When did I love Monster High

I've gone fangs-over-heels for Monster High in October 2011. My younger sister was browsing through the Mattel website and I ask my her to go to monsterhigh.com cause it seems interesting. After I read the characters and watch the webisodes on YouTube, I knew at that moment Monster High is the thing for me.

Cause every student in Monster High are so unique and different. They embrace they're freaky flaw as if it's a good thing. They never pretend to be someone else and they're always kind and sweet to each other even at the most toughest moment.

My favourite character is Abbey Bominable cause she and I have the same character. I can be sometimes cold and dishonest to other normies but, I have feelings too. I also love her skin colour, her accent, her hair and her outfits they're just the coolest.

I also like Clawdeen Wolf cause she does the most furrocious designs and she has an elder brother and a younger sister who annoys her like me. What I really like about her is her attitude, I really love it and when I used her attitude to the normies I dislike, they would be scared.

Coming in third is Jinafire Long cause she's an Asian ghoul who is also a Chinese like me. She can be calm in a way and I love Dragons, it's also a symbol of the Chinese nation. Her fashions and designs are off the fangs and I love the way she talk.

Rochelle Goyle is my fourth favourite. What's uhhh-mazing about her is that she's a Gargoyle who's hard as rock when it comes with her friends. Also the part that she's really athletic ghoul when it comes to sports including SKRM.

If I was a Monster Movie Character, I would be...

If I was a monster, I would be an Afterlife ghoul or a Thrall for short. Or maybe a Chinese Dragon like Jinafire.

MH dolls I own so far

Retrieved from "https://monsterhigh.fandom.com/wiki/User:Forbidden_Nightmare?oldid=285502"
Community content is available under CC-BY-SA unless otherwise noted.