Twyla is a 2013-introduced and all-around character. She is a freshman student at Monster High and is a boogeyman, daughter of the Boogey Man, she lives in the Boogey Mansion, a manor maze in New Salem, and beginning of her first introduction as a new character, the same age as Howleen Wolf, which is 14.

Twyla is voiced in English by Jonquil Goode. In Freaky Fusion she was credited under the name “Joni Goode”.

In Latin American Spanish, Twyla is voiced by Cynthia Chong.

In Italian, Twyla is voiced by Monica Bertolotti.

If Twyla were reduced to a single word, it would be "shy", which is due to being a boogeyman and living in the shadows. She appreciates sitting alone in dusty corners or being surrounded by shadows, and will almost always try to escape any situation she finds intimidating. Reserved and quiet, Twyla really dislikes being the center of attention. Luckily for her, her powers are an amazing asset for solitude.

However, Twyla's shyness does not mean she is unable to appreciate positive attention or enjoy a good laugh. It simply means her standards for feeling comfortable are higher than the average person's. Twyla is very comfortable in her own skin and embraces her freaky flaws, as well as everyone else's. At times, this means she's one of the few who can judge a situation level-headed. At others, this just leaves her feeling estranged from her fellow students.

Fair and down-to-earth, Twyla is almost always about serious talking but is also very sarcastic and is the one in the group to be most likely to drop dry of dark humor since she too is playful, in a strange stoic way.

However, she is extremely selfless and kind, to the point where one of her regular days involves undoing her father's doings of giving sleeping children nightmares by feeding on the negative energy projected by these, removing the nightmares from their dreams. Twyla will do this to children in most need to top it off, such as kids in foster homes.

In her 13 Wishes diary, Twyla refers to herself as "bad" and "terrible". It's unclear what brought her to this conclusion, as they don't appear to be solely caused by immediate events. Despite being shy, she can sometimes be friendly if she wants to be, such as towards Howleen, or greeting Cleo and being kind to her when believing her to be a "new girl" due to Howleen's "nobody wish" in the TV special movie, 13 Wishes.

Twyla has light purple-blue skin with grey hands and lower arms. Grey-colored patterns, invoking shadows, swirl up from her ankles to the middle of her lower legs. Her long hair is pastel green with blue and purple stripes which reaches her hips, and her eyes are purple-pink yet glow green in the dark.

Her clothes are picked to show her off as a little lady, as she wears a loose 3/4 dark blue sleeved shirt with a black spider print. The shirt has a medium-sized black bow in the middle. A small layered skirt covers some of her legs. Her boots are navy blue with heels that look like robots. Her fashion colors are pastel green, dark blue, and black. The themes incorporated in her killer style are dust, locks and keys, smoke, shadows, bugs, and dream catchers.

Twyla's father is the Boogey Man. Little is known about their relationship other than it's similar to a regular father-daughter relationship; however, it is implied that she does have a strained relationship with him, as she is very displeased by his nightmare-inducing traditions and therefore settles to undo them. It is unknown how her father feels about it or if he even knows.

No mention so far has been made about her mother.

Twyla's best friends are Howleen Wolf and Spectra Vondergeist. Howleen was the first student at Monster High who caught her off-guard, because Twyla thought she was invisible in the shadows, but as a werewolf, Howleen could smell her presence. Twyla chose not to flee that time and so befriended Howleen. Since then the two have been the closest of friends, and are almost inseparable.

Twyla has also grown closer to the other Wolf children through Howleen, notably Clawdeen, Clawd, and Clawdia. Even though the Wolfs are the complete opposite of Twyla in terms of spotlight needs, Twyla feels welcome among them.

She is also quite close to Gigi Grant, the genie, who she helped with her issues regarding her rebellious shadow Djinni "Whisp" Grant, and who has always been there for her. Gigi is a great friend of Howleen, who brought the two together. In fact, Twyla's shyness means that most of her relationships are induced by her best friend.

However, Twyla has worked hard to make her own friendships and has become quite tight with some of the students at Monster High, like Invisi Billy, who shares her interests and power to turn invisible, being co-founders of the Disappearing Club, or Catty Noir, who is also part of said club. She also has a sweet friendship with Rochelle Goyle who she really likes.

Her friendship with Spectra Vondergeist has so far only been brought up in her profile and is not explained. An estimated basis for their friendship is that since they are both reclusive, if for differing reasons, Twyla finds a kindred spirit in Spectra.

Finally, her most recent friendship is handed to Isi Dawndancer, an exchange student from Boo Hexico. The two met in Boo Hexico, when the latter failed a shadow jumping exercise of long distance. The two quickly become friends, as Twyla helps Isi out with her mysterious dreams.Isi Dawndancer's Brand-Boo Students diary The two were drawn back together when Isi traveled to study at New Salem and since then the two have been really close. Though not as close to her as Howleen, Isi is definitely one of Twyla's best friends. The two love each other's company and share deep relationships with the psychic world, with one being a dream collector and the other being a monster with visions and premonitions. Their relationship is explored in "Frankie Stein and the New Ghoul at School".

Twyla has a dust bunny named Dustin for a pet. He was blown her way by the wind one day, so she rescued and kept him. Due to his vulnerability to air currents, Dustin doesn't go outside often anymore and always eagerly welcomes Twyla home when she comes back from school. He does not get along with Watzit, as Dustin got Watzit’s crate dirty.

Twyla has the same taste in boys as Howleen, but isn't interested in anyone at the moment.

As a boogeyman, Twyla owns all the abilities of her fellow boogie monsters, mostly related to shadows. 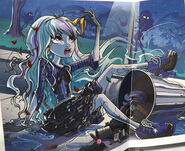 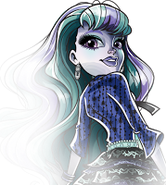 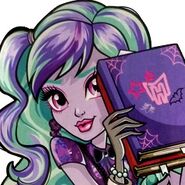