2014 was a weak year for the Monster High Tumblr account and marked the end of its Gory Gazette approach. It started as thinly as 2013 ended and did not improve. In fact, updates ceased suddenly in June when the account was in the middle of introducing the fused characters to star in "Freaky Fusion". Despite still being active in April, there was no April Fools' Day joke. The account only and suddenly returned to life for one day in December, namely the 11th, with a large number of incoherent merchandise-centric gifs.

Happy Boo Year, guys and ghouls! The MHGG is beyond thrilled to start 2014 alongside each of our freaky-fierce readers. Fangs for all of your support and good luck in the year to come! We Are Monster High!

There's no better way to kick off a voltageous new scaremester than with a freak-peek into the unlife of one of Monster High's most fiery transfer students. We sat down with Jinafire Long to bring you the inside scoop on how she's adjusting.

MHGG: Fangs for chatting with us today, Jinafire. I'm sure you have a lot on your plate while you prepare for the upcoming scaremester.
Jinafire: I must admit, adjusting to unlife away from my home has been difficult, but my friends here have been a monstrous support.
MHGG: Ghoulfriends are definitely important. You're close with Clawdeen, right?
Jinafire: Yes, Clawdeen and her friends have been so deadlightful. Plus, Frankie knows this school like the back of her hand. She's been grrreat in helping me find where I'm going.
MHGG: What are you most excited to do at Monster High?
Jinafire: I'm pretty passionate about my designs, so I'm thrilled to be involved with Fashion Club. I also can't wait to see the MH Nightmares take on our fiercest opponents in SKRM and casketball.
MHGG: It's sure to be a thrilling season for both sports.
Jinafire: Maybe I'll even join the Fear Squad, once I'm acquainted with everything, of corpse.
MHGG: You'd make a fangtastic new addition!
Jinafire: Fangs! I have to run, but I hope to see you around campus.
MHGG: You got it, ghoul! 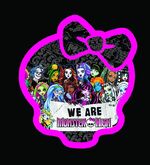 Fangs to a creeperific new campaign pieced together by the Monster High administration, enrollment on campus is at an all-time high! "We're deadlighted to welcome so many new faces to our halls," HH Bloodgood told our reporters. "Student bodies are eager to attend a school that celebrates differences and we are thrilled to have them." 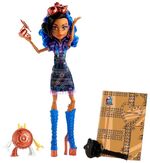 This scaremester, guys and ghouls are dragging their bodies into art class with tons of spirit. "There is a fangtastic new enthusiasm for the arts here at Monster High and I am so thrilled to encourage it," HH Bloodgood was overheard saying at a Parent/Creature conference.

With any unluck, this year's MH Art Show will be absolutely legendary!

Harrowing news, straight from the grrr-oundhog's burrow! We are in for another six weeks of sinister winter weather. Queen of the ski slopes, Abbey Bominable, is sure to be celebrating with a boo-berry snow cone tonight! 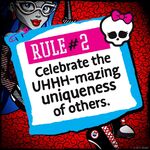 Monster High's resident ghoul, Ghoulia, was practically jumping for joy when she told our reporters: "I believe in celebrating the UHHH-mazing uniqueness of others and am organizing a Zombie Shuffle Flash Mob to help spread awareness that it is scary-cool to Be Yourself. Be Unique. Be a Monster." 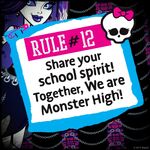 With Ghoulia's creeperific Ghoul Rules rally fresh out of the coffin, Spectra couldn't help but conjure up a quick column of her own. This scaremester, she is committed to ensuring that spirits soar at Monster High. Let your freaky-fierce love for our UHHH-mazing school totally fly...We Are Monster High! 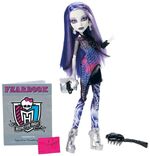 These ghoulfriends totally nailed it like a coffin! Clawdeen, Operetta, Venus, Frankie, Rochelle, and Spectra dug up a killer GFF date today to celebrate their freaky-fab friendship. They started this Valentine's Day with Coffinccinos at the Coffin Bean, shopping for swoon-worthy date outfits at the maul, and finally headed back to Frankie's house to watch their fave romantic comedies. 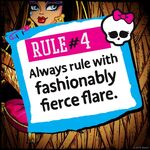 This scaremester, Monster High's most spirited student bodies are sharing their Ghoul Rules to unlive by. This week, we're thrilled to feature Cleo De Nile's dynastic take on the subject.

She told our reporters: "Furrrocious fashion and unique style can take you so very far in unlife." The MHGG is ready to know...what do you think of Cleo's exquisite advice this year? 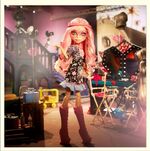 I'm here today with the monstrously talented, Viperine Gorgon, who is ready to dish the dirt on Hauntlywood, her new boovie, and her own freaky-fab flaw!

MHGG: Fangs so much for taking the time to chat with me, I know you're busy!
VG: Ever since we shot "Frights, Camera, Action!" my schedule has been a whirlwind, but I've had such a fun time with it all.
MHGG: Speaking of "Frights, Camera, Action!" any fun facts from the set you can share with our readers?
VG: I'm afraid the only juicy tidbit is actually about me.
MHGG: Please! Everyone is just screaming to know!
VG: Okay. Well, you may not know this about me, but I get so excited when I meet new monsters for the first time, sometimes I bite them.
MHGG: You bite them?!
VG: Yes. Unfortunately, it's how I show affection. Some people wave, some high five, some hug... I bite. I just can't help myself.
MHGG: Thank you for sharing your freaky-flaw with us. Now, can I bother you for a makeover sometime soon? I hear you're the beast Hauntlywood has to offer!
VG: Just name the time and place, and I'll be there, ghoul! 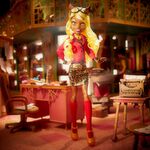 Cub sister, Howleen Wolf, reportedly had a three hour dish sesh with screamplay writer sis, Clawdia Wolf. They talked about Londoom, how Clawdia misses her Wolf family, and how much she loved working in Hauntlywood. She also offered up some freaky-fab advice about staying deadicated to following her dreams! 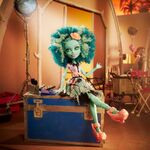 Boolicious style doesn't just happen overnight, ghouls. A true bayou beast always keeps some of her beauty tricks a secret, but I swear by marsh mud to tame my unruly locks. It also makes a great face mask! But the beast beauty advice I can offer is to Be Unique. Be Yourself. Be A Monster! - Sweetly Yours, Honey 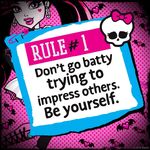 The Latest #GhoulRules Makes a Splash 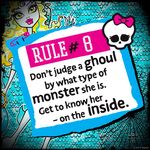 MH student bodies are dying to dive into this newest piece of advice!

When approached by our reporters, Lagoona gushed, "Get to know a monster instead of judging based on a-fear-ances. Your social un-life is sure to be fintastic!"

We asked student bodies around the world to share what Monster High means to them and thanks to your responses, we have a new school pledge!

H.H. Bloodgood couldn't be happier with the final product, which has all the guys and ghouls screaming "We Are Monster High!" 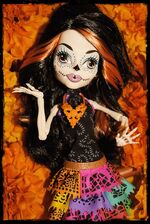 Skelita makes no bones about Cinco de Mayo! She's sporting a special outfit in honor of her favorite howliday. How freaky-fierce does it lurk when a ghoul rocks her scareitage?

Do you see what we see? This rumored new couple has found themselves trapped in a love labyrinth. Iris Clops and Manny Taur were spotted exchanging long glances across the Creepateria and in Study Howl.

Meowlody was overheard sharing this with Spectra: "Manny is so purrrfect. Iris is making me green with envy!"

When asked to confirm his status Manny turned as red as his shirt and charged down the hall. Iris was also being her usual shy ghoul and kept mummy. But it doesn't take two eyes to notice this pair is going to be haunting the halls for a while. 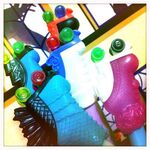 It was clear the Monster High Skulltimate Rollermaze team's fashion was freaky-fierce, but did their skating skills match? Fangs to their insatiable need for speed, the answer is a resounding yes. The ghouls won their first match in spooktacular style, both on and off the rink! 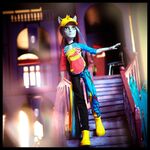 A new group of monsters have been seen walking the halls of Monster High. But these monsters aren't like any others...they're two monsters in one!

First sighting is Neighthan Rot. This zombie/unicorn Hybrid is a social manster who would do anything for a friend. One of his gore beliefs: "Making snap judgments about other monsters based on their lurks will get you off on the wrong hoof." 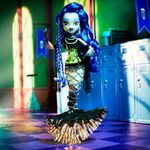 Student bodies are going crazy over this fintastic new Hybrid! Sirena Von Boo's look is inspired by both her ghost and mermaid scaritage. Her seawater pearls go swimmingly with her ghostly chains. 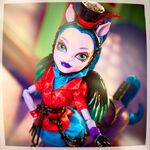 Could this centaur/harpy ghoul get any scary-cuter?! Avea Trotter's haunting the Monster High halls with her unique equestrian lurk. 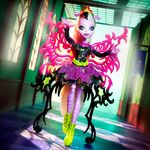 Rounding out the new group of Hybrid monsters is Bonita Femur. From her deadlightful wings to her boney feet, she's rocking mad vintage style. 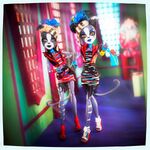 Spotted: The Werecat Twins creating a dancing kerfuffle in the MH halls. 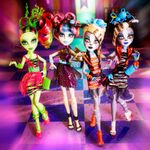 T-minus one day until Friday the 13th! Hope you have your dancing shoes ready, guys and ghouls. 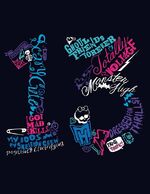 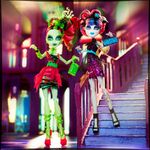 Venus and Rochelle are still shaking from yesterday's big zombie dance. Have you learned the moves yet?

Retrieved from "https://monsterhigh.fandom.com/wiki/Tumblr/2014?oldid=303882"
Community content is available under CC-BY-SA unless otherwise noted.