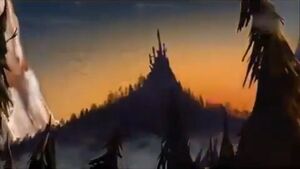 Transylvania is a region in the central part of Romania, located in Southeast Europe. It is home to numerous vampires as well as a lot of humans who don't agree with the vampires' presence.

Laura came to live in Transylvania when it still was called Dacia, sometime after 412. Her mother worked as housekeeper of Dracula until she died due to a disease that would also have killed Laura had it not been for Dracula turning her into a vampire in time. After this, Laura adopted the name Draculaura. Until the 17th century, she had a good life in Transylvania, even meeting the boy who would be her first big love: Valentine. She did not stay with him for long though, as her vampiric nature was recognized by the human population and she and her family chased away. The family resettled in the USA. However, Draculaura does have family remaining in Transylvania, and sometimes she and her dad visit them.

Transylvania also was one of the places Clawdeen's sketchbook lured Frankie Stein, Abbey Bominable, Jinafire Long, Ghoulia Yelps, and Heath Burns too. They were promptly chased out by an angry mob.

Retrieved from "https://monsterhigh.fandom.com/wiki/Transylvania?oldid=345355"
Community content is available under CC-BY-SA unless otherwise noted.