Toralei Stripe is a 2011/2017-introduced and all-around character. She is a werecat and a student at Monster High. Her best friends in life, to the point that they, for all intents and purposes are sisters, are Meowlody and Purrsephone. Toralei usually functions as the leader of their group and together the trio are some of the worst sources of trouble at the school. Toralei is a definite mean girl, who delights in bringing others misery, but she also has a soft spot for those in need, finding no satisfaction in bringing down someone who already is down. It is in this crucial way she differs from her pseudo-friend Nefera de Nile. Many of Toralei's acts are a form of revenge, even if she is the party that is wrong. She is easily hurt when people so much as imply they don't want to associate with her and her retaliation often vastly outweighs the slight. Toralei is currently in a relationship with Rocco.

As of 2016, her last name is no longer listed for some reason.

In the English cartoon, Toralei was voiced by America Young. By Adventures of the Ghoul Squad and the reboot or Generation 2, she is now voiced by Paloma Rodriguez.

In the Latin American version, she's voiced by Diana Jaramillo in volume 2, and by Analiz Sánchez since volume 3.

She has a cat-like attitude, and is self-assured, with a touch of a sarcastic purr. In "Scream Building", she stands up for the fearleaders when Cleo critiques them, but it seems like it was more about taking Cleo down a peg. She is an opportunist and a manipulator, whose clique of followers never speak for themselves and do her bidding. She causes a lot of trouble for the ghouls, whether it's by revealing their secret routine to their fearleading rivals, texting rumors about them or spreading dissent by playing to people's insecurities.

However, she shows a softer side to people in need of help, such as a troll named Teala, and Cleo de Nile when she was new to fearleading. In light of this, in the cartoon, she did actually do Lagoona a favor by forcing Gil to admit he lied and finally confront his parents about their judgmental views on salt monsters.

She is also willing to cooperate with other monsters, even those she dislikes, on occasion. For instance, Toralei plays on sports teams with the main ghouls in "Join the Scream" and shows very little hatred toward them, demonstrating good sportsmanship and even enjoying the experience (though she opted not to join permanently, as she "isn't much of a joiner"). She also helps with the fundraiser in the Freak du Chic webisodes, performing as a tightrope walker. In "Great Scarrier Reef", she eventually stood up for Lagoona before the performance due to Kala's bullying. In "Lagoona Blue and the Great Sea Scarecation", Lagoona helps Toralei cope with her fear of water, and after learning of Lagoona's stage fright, Toralei fills in for her at the talent show and is the Blue family's dance coach.

Toralei also proved in "Monster Mashionals Part 2" that, while she is scheming and manipulating, she is also honest. While she will always do her best to come out on top, she feels that victory is pointless if it is earned by cheating.

Toralei is also shown as athletic, as seen in the webisode "Join the Scream".

Despite not being able to sing in "Boo York", she is featured as a Fierce Rockers doll with Catty.

Toralei has orange tannish skin (or fur), with a darker orange spot around her eye. She has dark orange tiger stripes running up her right arm and left leg and four on her face. Her hair is styled in an asymmetrical bob and is dark orange with black stripes on her bangs in the webisodes; however, in the merchandise, the part of her bangs with the stripes is a lighter orange. Her signature outfit consists of a deep pink tiger-striped top with a black, open studded bolero jacket over it, an orange scarf around her neck, reddish-orange biker gloves, a yellow belt around her waist with a Monster High logo-stamped buckle, black leggings with deep pink tears, and open-toed shoes with deep pink laces and wedges.

In Generation 2, she still maintains her signature appearance and outfit remains the same, but her leggings are longer and cut down to her ankles. She also has fringed bangs, and her hair is slightly longer, sometimes having it in a ponytail. Her fur is also lighter and her ears are larger.

Toralei is a cat creature, and therefore holds many abilities that she shares with the actual feline.

According to her 'Campus Stroll' diary, she lives in a steady household with two loving parents (although these are her adoptive parents). Five older siblings are mentioned in "The Nine Lives of Toralei", with her being the runt, meaning she is a sextuplet. She spent most of her life on the street due to being abandoned as a baby. She was arrested for juvenile delinquency and sent to the pound with the Werecat Twins. The three were later given the chance to enroll at Monster High, which they accepted.

It is unknown what happened to Toralei's birth parents, but her siblings were adopted by another monster family.

Along with Toralei's introduction in "Scream Building" came the introduction of the twin cat girls Meowlody and Purrsephone, whom Toralei in her 'Campus Stroll' diary describes to be like sisters to her. She has made enemies of many of the Monster High ghouls, declaring Cleo an enemy in "Witch Trials" after she wasn't reinstated on the squad, and causing trouble for the team during their fearleading camp and trials. In "Queen of the Scammed" she texted everyone that Cleo and the squad are going to stay overnight at Monster High on Friday the 13th. But they fail when the ghouls stay overnight. One fact is for sure: she's definitely not friends with Cleo de Nile.

According from Cleo's 'School's Out' diary reveals that Toralei and the werecat sisters are on the squad because of her older sister Nefera and is apparently still in touch with her, the diary also states that Nefera is a "cat person" which may extend their acquaintanceship, since cats are considered sacred in Egypt.

In the webisode "The Nine Lives of Toralei", she seems to be friends with Spectra because she makes a news segment on her. At the end of the webisode, Toralei states that she loves the segment.

There is a possibility she's friends with Frankie, seeing how often Frankie's nice to her. TV specials with such examples include Freaky Fusion and Great Scarrier Reef. Although Toralei has taken advantage of Frankie sometimes.

Howleen Wolf is also on the soccer team with her.

Toralei is in a relationship with Rocco from Granite City High. Supposedly, their mutual penchant for playing dirty if that's what it takes to win is what attracts them to each other. But in the "A Night in Scare-adise: Prom 2014" dance, Jackson took her not caring about how she tried to ruin the dance and as what Clawdeen said she looked happy when they were dancing.

In the film Welcome to Monster High, one of the Zomboyz from Moanica D'Kay's army attempts to flirt with her, and she seems to not mind it.

While she did originally show interest in Kieran Valentine due to their shared love of scheming, she was upset with him after he used her as a shield to avoid being splashed himself. 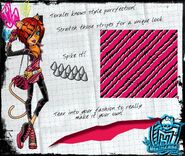 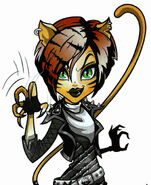 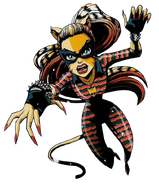 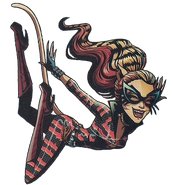 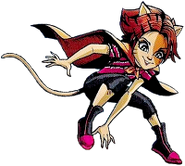 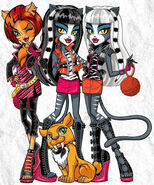 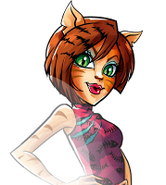 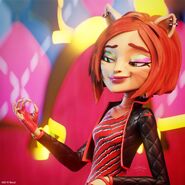 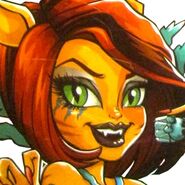 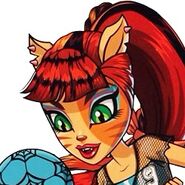 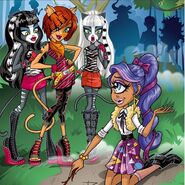