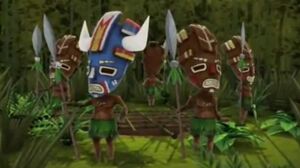 The Tiki (sometimes plural Tikis) are a species of living wooden idols and the only indigenous inhabitants of Skull Shores.

They debuted in "Escape From Skull Shores", in which they are voiced by Jonathan Lipow.

The Tiki are kind creatures, though a little wary for strangers. Getting past their initial defensiveness may require some effort, but the hospitality and generosity that follow are well worth it. The only thing overshadowing the Tiki's sense of loyalty is another fear of theirs: the one for the mysterious Beast of Skull Shores. Eager to get rid of it and feel safe on their own island, the Tiki are prone to go with whatever anyone promising to help them, get rid of the beast tells them to do, no matter how much it goes against their ethical beliefs.

The Tiki are a Monster High original species of monster, though with a basis in real-life objects. The Tiki are living wooden idols with heads almost as large as their bodies. The heads are designed to look like Polynesian masks, while the bodies are equally so idol statues. In history Tiki were the images of the gods of the Polynesian people. The Tiki shown in Skull Shores are more correctly referred to as Tiki Masks.

They made their debut in "Escape From Skull Shores".

Retrieved from "https://monsterhigh.fandom.com/wiki/Tiki?oldid=345605"
Community content is available under CC-BY-SA unless otherwise noted.