Volume 1, Episode 8: Draculaura is crushing on the hottest guy in school — literally! Cleo gives her a scary makeover. Will it kill her pal's chances or totally backfire?

The bell rings and students fill the hallway. Draculaura runs to her locker, muttering that she has only two minutes left to make sure she looks right. Howevever, opening her locker to get access to a mirror reminds her she can't see her reflection. Lamenting this part of being a vampire, she is caught off-guard when Cleo appears. Cleo takes note of Draculaura's distress and begins interrogating her.

Draculaura admits she wants to look good for the 'new boy', who's been walking by her locker about every day since he arrived. Cleo recognizes this as the start of a story that doesn't interest her, so she prepares to leave until Draculaura dramatically exclaims that her crush is "the hottest boy in school". Cleo counters that that title goes to Deuce, her boyfriend. Draculaura concurs that Deuce is awesome, but is so for Cleo, while the new boy is utter perfection to her.

Just then, the new boy appears and Draculaura panickily asks Cleo if her makeup is alright. Cleo sees her opportunity for revenge and replies that Draculaura could use a little help, for which she volunteers. Cleo applies a ton of makeup to Draculaura's face, deliberately making a mess out of her appearance. Unaware of this, Draculaura thanks Cleo and skips to her interest. As Cleo planned, when he sees her, he exclaims she looks horrible, but then he steps outside of Cleo's expectations by declaring that he likes that in a girl. He offers Draculaura his arm and the two walk away, Draculaura throwing a last "thank you" over her shoulder to Cleo, who is standing utterly perplexed.

Out of nowhere, Frankie approaches Cleo and admits she's been watching and compliments Cleo for being so nice to Draculaura. As the bell rings, she walks off again, leaving Cleo alone to stomp her foot in anger. 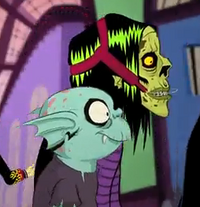 Retrieved from "https://monsterhigh.fandom.com/wiki/The_Hot_Boy?oldid=312858"
Community content is available under CC-BY-SA unless otherwise noted.