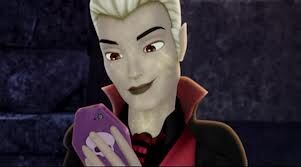 Thad is a 2012-introduced and fiction-only character. He is a vampire, one of Dracula's niblings and cousin to Draculaura. Like Draculaura, he has no issue socializing and even dating werewolves and in fact went on a date with Clawdeen Wolf once.

Thad is voiced by Evan Smith.

Thad has pale sparkling skin, red eyes, light blonde hair, and pointy ears. He wears a black shirt with a red vest that has a high collar. He also has on a red and black striped tie.