Jackson Jekyll was trademarked on January 15, 2009 and his first doll came out in Late November, 2010. As of January 01, 2015, his doll number totals 4 and makes up 1.18% of the entire Monster High doll collection. Other merchandise of his is not yet available.

Jackson wears a yellow and white diagonally striped button-up sleeveless shirt, with black and white striped accents at the collar and pockets. He wears black shorts with one patterned leg in black, yellow and green squares, and black flip flop sandals with yellow straps. He wears orange shutter sunglasses. His outfit comes with a black and white beach ball with a ying-yang symbol with a yin and yang symbol between his shoulders.

Jackson has black hair with blond ends, blue eyes wears a button up yellow shirt (which he has untucked) and a green, black and grey checkerboard sweater vest with black trim. He wears a blue bow-tie and black rectangle glasses, and wears blue and green high-top sneakers in the same fashion as Holt wears his own black pair and wears grey denim pants with white stitching. His belt is black with a silver buckle and he has an eyebrow piercing in his left eyebrow with a yin and yang symbol between his shoulders.
He comes with a Crossfade figurine.

Doll: Black hair with blond ends slicked up, blue eyes with yellow rectangle glasses. he has an eyebrow piercing in his left eyebrow with a yin and yang symbol between his shoulders.
Clothes: He wear light and dark grey checkered cardigan with a blue and green tank top with a yin yang symbol with checker and yellow pant with dark grey slip on with yin yang symbol on it.
Accessories: Water bottle with spider pudding with a black skullette brush
Extras: TBA
Notes: TBA

Doll: black hair with blond ends, blue eyes with yellow eyebrow piercing in his left eyebrow also a makeup stitch with hexagon blue glasses with a yin yang symbol between his shoulders.
Clothes: Save Frankie with symbol black and yellow collar shirt with blue,yellow,and black short with yellow and blue slip on with a blue and black bracelet on his right wrist.
Accessories: A blue monster high bracelet mirror of frankie and a poster of her with yellow skullette brush.
Extras: TBA
Notes: TBA 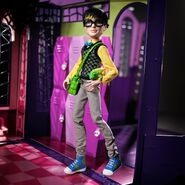 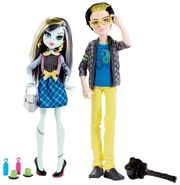