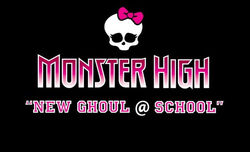 For 2010 and 2011, there was only one TV special per year, both released on Halloween. They were produced by W!LDBRAIN and Top Drawn Animation like the webisodes still are. Starting in 2012, multiple TV specials were released per year and the animation job was handed over to Nerd Corps Entertainment and DHX Media. This has caused an art shift from 2D animation to 3D animation for the TV specials only. The sound for all TV specials remains the work of Salami Studios, which is also responsible for the sound of the webisodes.

Unlike the webisodes, each of the TV specials specifically ties in with one or more doll lines, which generally are released a few months prior to their respective TV special. So far, each year of TV specials has featured a different way for them to tie in with the webisodes: "New Ghoul @ School" represents an alternative to at least the first half of and possibly the entirety of Volume 1 - a volume still experimenting with the characters and its storytelling; "Fright On!" neatly fits at the end of the storyline-heavy Volume 2 and ties it to Volume 3; and the 2012 TV specials have no specific ties to the Volume 3 webisodes, which those webisodes also don't have to one another.

In 2016, TV specials were released the new 3D animation produced by Flaunt Productions.

Retrieved from "https://monsterhigh.fandom.com/wiki/TV_special?oldid=350338"
Community content is available under CC-BY-SA unless otherwise noted.