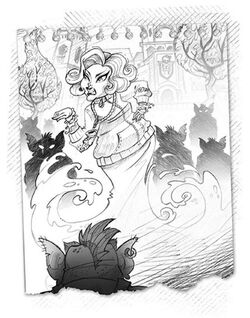 Sue Nami is a 2012-introduced and prose-only character. She is a water elemental and a staff member at Monster High. Her position is officially named Deputy of Disaster and she functions as both a hall monitor and as Headless Headmistress Bloodgood's assistant. She is a rude and singleminded woman who is only willing to loosen her schedule for fellow adults, but just as much doesn't care even if they are around when she needs to shed excess water. On the other hand, she is both trustworthy and reliable beyond compare and can handle a large variety of tasks.

Best illustrated by her choice to refer to the students as "non-adult entities" even when talking directly to them, Nami is a woman who only has a small amount of respect to spend and she'll only spend it where she has to. Once she sets her course, few can make her change it. The rest can either go out of her way fast or be shoved aside and drenched if they let it come to a confrontation. Either option doesn't even make Nami blink. She keeps a tight schedule and performs her duties with efficiency at the cost of elegance, pushing the responsibility of any mess she makes onto others. But for all her bad traits, she has many more good ones. She is versatile and able to handle a lot of a responsibilities at once. And though she is cranky and dismissive, she trusts others to tell the truth and if the problem is severe, she has no reservations going after and solving it no matter the risk or effort.

Ms. Nami is a short, rotund woman of limited shape, with dark lipstick on, and with permanently pruned skin. She has the usual limbs, but because she's constantly producing water in particular her legs regularly get obscured. At the risk of flooding, she has to shake herself at least three times an hour to get rid of the excessive water. She has crisp blue eyes and short grey hair with curly ends. She wears a necklace, and a hoodie like top without the hood, and pockets in the front.

After Headless Headmistress Bloodgood is struck by lightning and can't keep her thoughts straight anymore, she brings in Ms. Nami to maintain order and to provide assistance whenever her own mind fails her again. One of the first tasks Nami is assigned to is to give Rochelle a quick tour around Monster High, which Nami does despite it messing up her schedule. After dropping off Rochelle with Mr. D'eath, she makes her way to the vampitheater to help Bloodgood prepare her Back to School speech. During the speech, the new Dragon Whispering teacher, Sylphia Flapper, is introduced, and Nami has a bad feeling about her from the start. As the days pass and the staff and students start behaving peculiar, Nami notices the change but is too preoccupied to figure out the problem. It is only when Venus, Rochelle, and Robecca tell her off Flapper's doings and ask for her help that she takes action, but unaware of the scope or Flapper's methods, she falls easily. Like everyone else, she is saved by the three girls and Cy a few days later and is the one to organize the school so the four students have the opportunity to explain what happened. Ghoulfriends Forever

Retrieved from "https://monsterhigh.fandom.com/wiki/Sue_Nami?oldid=344556"
Community content is available under CC-BY-SA unless otherwise noted.