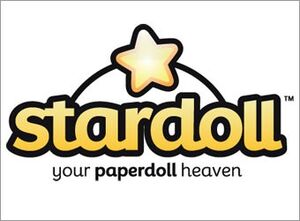 Stardoll is a community-focussed digital doll dress-up website launched in 2004 as Paperdoll Heaven by Liisa Wrang and relaunched in 2006 under its current name. Stardoll targets a demographic of ages of 9 to 17, with a focus on female users. Registration is free and comes with a MeDoll (designed by the user) and an own space one the site designed as a two-room living space. Users are given a few starcoins and stardollars at the start, the website's currency, to buy themselves more digital clothes and other dolls. More currency can be earned by playing games or participating in activities on the site. There's also an option to a paid account, which makes the living space larger and earning site currency easier.

Mattel partnered with Stardoll first to promote Barbie, and Monster High dolls and fashion were added to the partnership on May 5, 2010 - the launch date of the franchise. The first dolls added were the primary seven of the 'Basic' cast and the first fashion likewise was the 'Basic' fashion. Since then, more has steadily been added and Stardoll has been involved with various kinds of promotions, most notably a chat with Draculaura to celebrate the Sweet 1600 releases.

Retrieved from "https://monsterhigh.fandom.com/wiki/Stardoll?oldid=256385"
Community content is available under CC-BY-SA unless otherwise noted.