Spectra Vondergeist is a 2011-introduced and all-around character. She is a ghost and a student at Monster High. She is the reporter of Monster High, and a celebrity within the student body, editor of the in-school famous Gory Gazette blog, the former Ghostly Gossip.

She is voiced by Erin Fitzgerald in English.

Though Spectra herself does not make an appearance in the music video for the Monster High Fright Song, there are several different character ghost analogues who received creative interpretation by the video crew. The "Ghost Girl" is portrayed by Catina Duscio.

Spectra's past is probably one of the most covered mysteries within the Monster High community. In fact, she is quite reluctant to uncover anything about her past. In her diary it's hinted that she's constructed a mysterious, fanciful history for herself, and even began to believe it herself, but that the truth about her family is actually quite tragic. Until further reveal, that truth is still unknown.

However, due to expressions from her behalf, like mentioning her death Fright On! , it is safe to assume that she was a human at a certain time, implied to be from the 19th century. Ghoul Spirit

What is for certain is that she once lived in the Ghost World, her first home, and used to attend Haunted High, befriending who would later become her closest friend, Kiyomi Haunterly. However, her family thought it was better to leave their world and do something very little ghosts thought to: cross borders to the Monster World. Haunted

Spectra is a floating mystery. She used to be shy and reclusive, whispering her phrases, hanging by herself, and comfortable with that and, in fact, benefiting from her mysterious aura to blend in and watch her stories unfold beneath her eyes, spying on the students for scoops. However, ever since the secret face of her gossip blog, the Ghostly Gossip, was revealed, she has become more outgoing and less secretive.

However, she has or used to have a very forceful personality, and she often made quick judgments and leaped to conclusions without supporting evidence. She regularly created stories from loosely related details that she may not have heard correctly, which she connected using her own imagination. Her method of journalism ran so deep in her psyche that she couldn't tell her fabrications apart from reality. Even when they pertained to her own person, she sooner believed her own fantasies than the documented truth. It didn't help that she was an avid gossiper either, as her desperation for scoops would lead her to take what was given, no matter what. Because of all this, Spectra is one of the most controversial students at Monster High. On the one hand, she owned one of the two most popular news sources at the school, but on the other, she has hurt more than a few fellow students by spreading lies about them.

When confronted with the facts, she tended to dig in her heels. She drew the line at planting a fake story, though, which is completely against her morals. That isn't to say she wouldn't publish stories she believes are true, even if they really were lies. This makes for an excellent gossip columnist, but not a friend you want to share secrets with.

As of "Haunted", however, Spectra experienced first hand what gossip and non-verified information could do to people and since then has built a dedication to fact that turned her world inside out, turning her from a gossiper to a legit reporter. She has matured and drawn the line between acceptable and unacceptable, renaming her blog, to Gory Gazette.

But despite all this, she is seen as a kind monster and helps those in need of her, who can be a bit of a scatterbrain, which prevented her from seeing the damage she made, oblivious to other's feelings. However, Spectra is just as sneaky as she is naive and incredibly intelligent, making it almost impossible to know what is real about Spectra, as she is also an expert at lying, making facades, and arranging stories quickly, prone to trow and excuse into the fraction. Spectra is also known to easily get the truth out of other monsters, giving her a detective/reporter complex. Her favorite food is Angel Food Cake because it is as light as she is.

Since Spectra is a ghost, her skin is ghostly pale — almost stark white — and then fades to transparent at the beginning of her hands and feet. Her face is somewhat gaunt.

Spectra's hair is long and violet, with periwinkle and pinkish-purple highlights. It is usually frisky; the ends sticking up and looking as if it were floating like a ghost (though straighter on the 'School's Out' doll and in the CGI 3D TV specials). Her hair is sometimes tied up in a ponytail.

Her eyes (irises) are a bright icy blue, with the pupils being a dark blue, and the sclera or sclerae (or "whites" of the eyes) are not white but instead a pale lilac. Her lips/lipstick are/is purple. Her fashion motif is Gothic; chains, black balls, and shackles, along with an attire consisting of round purple and black earrings, a black halter tank top with light magenta edgings and chains on the front, a chain necklace, a shackle belt, a magenta tattered skirt with black, translucent overlay skirt, and magenta, ankle-length boots with two chains around the ankle and barbell-styled heels. She wears a bracelet that resembles a silver hoop on her wrist in the artwork and on her doll, but in the webisodes, her bracelets are shackles, and she wears two of them. Because she is a ghost, Spectra's skin is made of ectoplasm rather than real flesh.

Spectra writes in her diary that her long-lost love haunts "the family's ancestral castle," but it's strongly implied that all of this was something she'd made up.

Her parents are ghosts, but nothing else is known about them. In her diary it's hinted that the truth about her family is actually quite tragic, though it's never revealed -- the story Spectra writes about (castles, a midnight journey across borders) is something she made up, and even began to believe it until Ghoulia reminded her about the truth. As per Ghoul Spirit, Spectra is a ghost from the 19th century.

Her first bio stated it as 'everybody loves Spectra V', but seeming she wrote the bio, she may be lying. In the webisodes, she is never really seen hanging out with anyone and isn't immediately connected with any group of students.

However, Spectra has developed closer relationships with the Fearleading Squad, whom she seems to prefer Ghoulia Yelps' silent endeavor and Clawdeen Wolf's loyalty, as it was the latter that initiated her process to put things in prespective and change her entire bussiness plan, and showed her the ways of truth and facts.

Her most recent bio states she's also quite close with Twyla, a relationship that might be inspired by the reclusiveness of the two and their mysterious spookiness, Catrine DeMew and Clawd Wolf, whose interactions with Spectra are little to none in any canon.

Despite this, if Spectra had to choose a best friend, it would probably her childhood friend Kiyomi Haunterly, who was loyal to her during the years they were together, as Kiyomi found her only friend in Spectra. Both were students at Haunted High and studied together at some point and support each others deeply, and despite it being a hard separation for her, Kiyomi was the one to reassure that Spectra's family choice to move between worlds was the best.

In Where There's a Wolf, There's a Way, Spectra expressed interest in Billy Phaidin, a boy she'd known since eighth grade. As of Back and Deader Than Ever, it is known that the two are dating. In 'Fright On', she is seen initiating a dance with a student from Belfry Prep.

Porter "Paintergeist" Geiss has an interest in Spectra. The interest is mutual. This was revealed in Haunted. Porter called them a ‘duo’ and on many occasions complimented Spectra, whether he meant to or not, such as saying she was smart. Spectra expressed her worries about Porter when she stayed back at Haunted High wishing he could come with her. Spectra has hugged Porter and kissed him on the cheek. It was also implied that with them it was love at first sight. For example, when Spectra was going to confront their principal Porter said, "No! I could lose you." 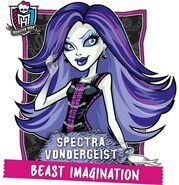 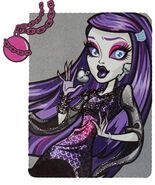 Spectra in the monster high commercial

Spectra and Abbey in their first ever doll commercial together. 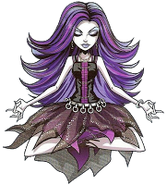 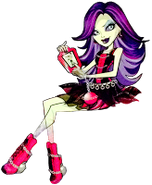 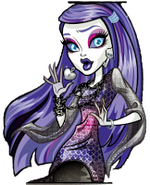 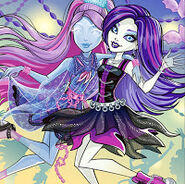 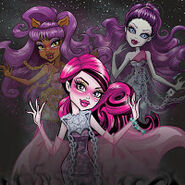 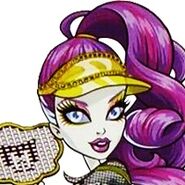