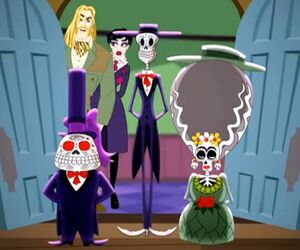 The Skullastic Superintendents, otherwise know as the Board of Deaducation, are a trio of stoic calacas. They are supposedly in charge of the worldwide monster school network and can decide on the course a school takes or whether it may continue to exist. 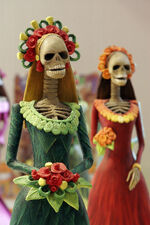 "Calaca" is Spanish for "skeleton" and refers to the skeleton imagery associated with the Mexican celebration of the Day of the Dead, natively known as Día de los Muertos as well as "Undas", the Filipino term for All Saints' Day. A related term is "calavera", Spanish for "skull", which is sometimes used instead. Popular calaca 'characters' are La Calavera Catrina and Santa Muerte.

While undeads of all kinds have been believed in throughout time and culture, few rival the association with death that living skeletons hold. This was the case for both Europe and the Aztecs by the time the Spanish invaded what would later be Mexico. The Aztecs had a number of festivities to honor Mictlantecuhtli and Mictecacihuatl, their gods of death represented as skeletal figures. When the Spanish invaded, the traditions of these festivities were merged with the Catholic holidays of All Saints' Day and All Souls' Day into a new festival called Día de Muertos, or Day of the Dead. In celebration of this day, drawings and sculptures of skeletons that are having a good time are produced, as it is believed that the dead don't like to be mourned.

A small area of unclarity that remains from this is whether the Skullastic Superintendents are living skeletons or living dolls looking like skeletons. The assumption lies with the simpler former answer, but it is possible the latter is true.

The Skullastic Superintendents were tasked with judging Monster High's ability to bring monsters together through the merging of a vampire-only school and a werewolf-only school into itself. When they arrived at Monster High to rate the results, they were greeted by the famed monster expert Van Hellscream and Headless Headmistress Bloodgood, in reality a disguised Crabgrass. Van Hellscream didn't want a unified monster society out of fear it would bring death to the human race, so he and Crabgrass had been stoking the lingering hatred between the werewolves and vampires. Van Hellscream made a show of trying to look like he had Monster High's best interest at heart, unaware the real Bloodgood and several students had already revealed the setup to the vampires and werewolves and arranged for the Skullastic Superintendents to find no strife among the student body.

Eye of the Boo-holder: They act as judges at the art competition at Monster High.

Freak Du Chic Act 2: As part of the Board of Deaducation, they decide that of the Freak du Chic won't act that night, the art programs would be cancelled.

Retrieved from "https://monsterhigh.fandom.com/wiki/Skullastic_Superintendents?oldid=349537"
Community content is available under CC-BY-SA unless otherwise noted.