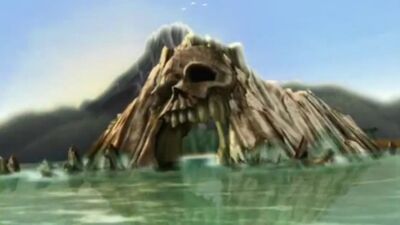 Skull Shores is a Polynesian island nearby Australia. It is home to only one tribe of sapient creatures, the Tiki. Skull Shores has been mostly left alone by the rest of the world, but the Tiki do have facilities to accomodate guests.

The Tiki are the only sapient creatures native to Skull Shores. While a little wary of strangers, they are not unfriendly, and presumably were very welcoming to visitors prior to the arrival of Andy Beast. The boy probably arrived around the 18th century, and did so accidentally on his way to another location. Due to an affection that made him turn into a monster if exposed to negative feelings, Andy chose to stay in the hope of finding peace on Skull Shores. But his powers scared the Tiki and continued the cycle. Using the remains of the ship with which he arrived and which had been damaged in a storm, he made a treehouse at a considerable distance from the Tiki village, so that he could stay with minimum trouble.

This proved a futile dream, as word of the "Beast of Skull Shores" broke out to the rest of the world soon enough. Presumably at the start of the twentieth century, Skull Shores was visited by an expedition that wished to capture the beast. Among them was a human girl who was considerably less prejudiced about the creature. She became the first friend Andy ever had, but eventually she left the island. In remembrance of her, Andy created several statues in her likeness and placed them around the island.

Some decennia after that, the island was visited by another who wished to capture the monster: Bartleby Farnum. However, despite getting the Tiki to help him, he failed numerous times at capturing the beast. He returned for the umpteenth time in the 2010's, this time with a group of monsters. Among them was Frankie Stein, who was almost identical in appearance to the beast's old friend. Bartleby intended to lure and capture the beast using Frankie as bait, but had the beast escape him together with Frankie.

As Farnum, the Tiki, and Frankie's friends engaged pursuit, Frankie befriended Andy as her predecessor had done. She convinced him to come to the USA with her and enroll at Monster High. After a confrontation that made the Tiki choose the students' side and therefore Andy's, who they were convinced to not be a threat, Farnum was gotten rid of and the students and Andy left Skull Shores.

Following some events at Monster High, spring break was extended for another week. On Abbey's advice, the entire student body decided to spend their extra vacation on Skull Shores, much to the appreciation of the Tiki.

The "harbor" of Skull Shores.

Some of the statues of Andy's friend.

The gorge.
Add a photo to this gallery

Retrieved from "https://monsterhigh.fandom.com/wiki/Skull_Shores_(location)?oldid=279953"
Community content is available under CC-BY-SA unless otherwise noted.