I have millions of pets and I get to see them each winter when they migrate back to Hexico. They are the Monarch mariposas and I love to be surrounded by their soft, fluttering beauty.

Skelita Calaveras is a 2012-introduced and all-around character. She is a skeleton and a student at Monster High. Skelita was born and raised in Campasuchill, Hexico in a warm and supportive household, Skelita chose to take a risk and leave the nest (although her collector’s edition doll states she may have lived in Oaxaca). She set out on her own after befriending fellow fashion designers Clawdeen Wolf and Jinafire Long in Scaris and traveled to the Boonighted States of Scaremerica to share classes with the both of them. She is now embraced to the high school way of life at Monster High, and she even is official guardian of the cemeteries.[1]

She is voiced by Laura Bailey in English.

She is voiced by Lety López in Latin American Spanish.

Skelita was born and raised in Hexico, in the city of Campasuchill, to two skeleton spirits of the monster world, meaning she was never a human, like many of her kind. She has been immersed in the Hexican culture, both from the undead side of the family and the alive side of the family, which she annually interacts with, and has loved every minute of her life, as a cheerful girl. This made her decision to move to the Boonighted States of Scaremerica harder, but upon seeing how the monsters for the Monster High school were united by friendship, she was inspired to join them and be emerged in a different kind of culture, enrolling for the exchange student program.

She is kind, gentle and soft-spoken, which would put her at a disadvantage if not for her ability to win people over with her passion. Though she can be a little insecure and diffident at times, her passions, and her family, give her strength to do the things she loves. Friendly, tireless, creative and with a great sensibility to the arts, Skelita is always willing to lend a hand and wise words to her friends. Her family is the most important thing to her, and she loves making them proud since she herself is very proud of her ancestors, being in her own nature to celebrated them, with her favorite celebration, El Día de los Muertos. Ironically enough, Skelita's favorite color is the color of the flower marigold, which is the same marigold-orange color of the streaks in her black curly hair.

Skelita's body consists primarily of bones, though she has long curled black hair with marigold-colored streaks and warm brown eyes, instead of the typical eyeless sockets of non-undead skeletons that are not monsters. Her face resembles a sugar skull and she has visible black vertical lines on her lips. She likes to dress in classical clothing with a hint of Mexican imagery and cultural references. Her orange necklace was given to her by her abuela.

Skelita has little special abilities, due to her being an undead creature rather than a powerful one, however: 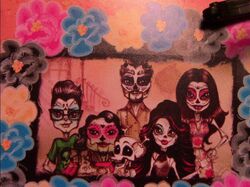 Based on artwork of Skelita, her family consists of a mother, father, younger brother, grandmother, dog, and herself. All of them are skeletons. Her sketchbook also mentions she has a grandfather, either paternal or maternal, that is part of a mariachi band, Los Dedos Locos, an aunt named Catrina and at least one cousin, who had recently celebrated her Quincenscara. Skelita's family lives in a hillside cemetery in the jungle, in Campasuchill, Mexico [1], while an aunt and uncle have a house at the beach Skelita Calaveras Unearthed She also comes from a long line of Calaveras, whose ancestors include Bonempak, who was a Chefe de Brujaria (witch doctor) back at her time, around the Mayan era and her Grandmother and Great-Grandmother are also known to have lived during the Western era. She also mentions the Zunigas, a group of distant cousins and a huge array of the human-side of the family that she only gets to see when she's invited to the Dia de los Muertos celebrations. Skelita Calavera's Collector's Edition diary

A grandmother has appeared in "Scare-itage", presumably the mother of Skelita's father. She may or may not be the grandmother in the picture in Skelita's diary, who looks more like she'd be her mother's mother.

Skelita has a special place in her heart for her grandmother, who she loyally wants to impress and follow in her footsteps. Skelita goes as far as claiming that she and her 'Abuela' are very much alike, with equal interests, and also considers her her best friend. Skelita loves her grandmother dearly and the feeling is reciprocal, considering Skelita was the chosen one to carry on the most especial heirloom, the necklace made from volcanic gems. Scare-itage Her grandmother is also into pottery and urn making.

She and her grandmother also do a lot of activities together, which Skelita highlights Dia de Los Muertos preparations as her favorite. She feels special when doing so, but when her little brother started to help both with the preparation shores she initially felt disappointing and jealous of him, for getting grandmother's attention and ruining their special moment, but soon she realized that sharing the happy moments was the best thing to do.[1]

According to her biography she is friends with Jinafire Long and Clawdeen Wolf. Her relationship with Jinafire wasn't the best in the start, for Jinafire was way too concentrated on her work to have fun Scaris: City of Frights but now they're pretty much inseparable, sharing their interests in designing. This is also the reason why she and Clawdeen get along so well, though Skelita has expressed her fear of werewolves due to the fact she is made of bones, which makes her a little anxious around canines. Skelita Calaveras Unearthed

She also has an array of childhood friends, mostly human, that she has met during the interchanging of worlds enabled by the Day of the Dead celebrations, such as Gloria, a young human girl she met at the age of 4, who she exchanged dolls with, starting a beautiful and long-lasting friendship, or Carlos, an equally human young teenager she met at the age of 8, and introduced to the concept of the celebrations.

In her diary, Skelita mentions having a pet butterfly named Nati. The Calaveras household also contains a skeletal dog. On the website profile she mentions that millions of Monarch butterflies are also her pets whenever they visit back from winter. 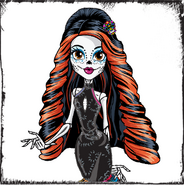 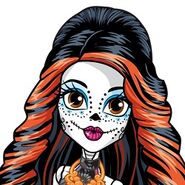 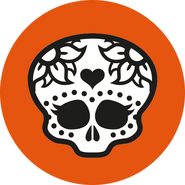 Retrieved from "https://monsterhigh.fandom.com/wiki/Skelita_Calaveras?oldid=348168"
Community content is available under CC-BY-SA unless otherwise noted.