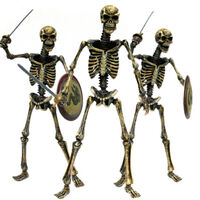 A skeleton is a type of physically manifested undead often found in fantasy, Gothic and horror fiction, and mythical art. Most are human skeletons, but they can also be from any creature or race found on Earth or in the fantasy world.

Animated human skeletons have been used as a personification of death in Western culture since the Middle Ages. The Grim Reaper is often depicted as a hooded skeleton holding a scythe (and occasionally an hourglass), which has been attributed to Hans Holbein the Younger (1538). Death as one of the biblical horsemen of the Apocalypse has been depicted as a skeleton riding a horse. The Triumph of Death is a 1562 painting by Pieter Bruegel the Elder depicting an army of skeletons raiding a town and slaughtering everyone.

Figurines and images of skeletons doing routine things are common in Mexico's Day of the Dead celebration, where skulls symbolize life and their familiar circumstances invite levity.

"The Boy Who Wanted the Willies" is a Brothers Grimm fairy tale in which a boy named Hans joins a circle of dancing skeletons. Mekurabe are rolling skulls with eyeballs who menace Taira no Kiyomori in Japanese folklore.

The animated skeleton featured in some Gothic fiction. One example is "Thurnley Abbey" (1908) by Perceval Landon, originally published in his short story collection Raw Edges. It is reprinted in many modern anthologies, such as The 2nd Fontana Book of Great Ghost Stories andThe Penguin Book of Horror Stories.

They have also been used and portrayed in fantasy role-playing games such as Dungeons and Dragons. The basic animated skeleton is usually a low-level form of undead, and considered suitable for use against novice players.

Undead skeletons have been portrayed in fantasy films such as The 7th Voyage of Sinbad (1958) Jason and the Argonauts (1963) and Army of Darkness (1992).  Here they were the result of Hydra teeth being planted into the ground as seeds and growing into undead skeletons, inspired by a similar Greek myth about planting the teeth of the Colchian Dragon to grow warriors.

In the 1993 Disney film Tim Burton's The Nightmare Before Christmas which has since become pseunonymous with the Halloween genre, the protagonist is a skeleton named Jack Skellington.  Jack is the "Pumpkin King" ruler of Halloween-Town and steals Christmas from Christmas-Town so that the citizens of Halloween can do it themselves.

There are a few skeleton characters in Monster High like Skelita Calaveras, her family and the Skullastic Superintendents. Bonita Femur is daughter of a skeleton and a moth. Most other skeletons are background characters and their true names are unknown. There was also a skeleton monster that was part of 2011 Create-A-Monster.

Skelita was born and raised in Campasuchill, Hexico in a warm and supportive household, Skelita chose to take a risk and leave the nest (although her collector’s edition doll states she may have lived in Oaxaca). She set out on her own after befriending fellow fashion designers Clawdeen Wolf and Jinafire Long in Scaris and traveled to the Boonighted States of Scaremerica to share classes with the both of them. She is now embraced to the high school way of life at Monster High, and she even is official guardian of the cemeteries.

Skeletons are animated human skeletons, most have been shown to have white or grey bones but Bonita Femur who is a hybrid has pink bones. Skeletons in monster high usually have darker hair colors, or in the case of most skeleton background characters they are bald.

Some skeletons have make-up on their faces resembling a sugar skull, thou a lot of skeletons don't have this so it's most likely that some skeletons just wear sugar skull like make-up, or some may be born with it, it's unknown if that's the case or not.

It's not confirmed if all skeletons have these abilities, but at least Skelita Calaveras has been shown to have them.

Bonita Femur Half skeleton half moth

Aery Evenfall Half skeleton half centaur 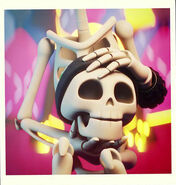 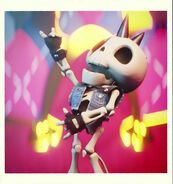 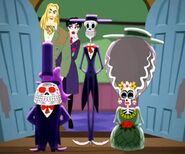 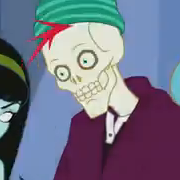 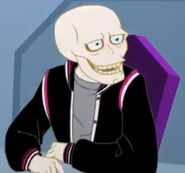 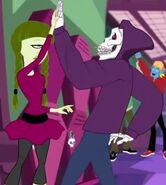 Add a photo to this gallery
Retrieved from "https://monsterhigh.fandom.com/wiki/Skeletons?oldid=346822"
Community content is available under CC-BY-SA unless otherwise noted.