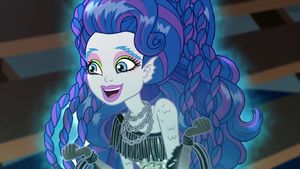 Sirena Von Boo debuted in the cartoon series in the Volume 4 TV special "Freaky Fusion", which premiered on September 16, 2014. She is voiced by Paula Rhodes in the English version of the cartoon.

Sirena and her fellow hybrids—Bonita Femur, Avea Trotter, and Neighthan Rot—have just transferred to Monster High as the latest in a line of schools where they try to fit in due to their dual scareitages. Sirena is hopeful about their chances but keeps back from the other students on advice of her friends to spare herself getting her feelings hurt. She gets an opening at proper contact when the hybrids witness the rehearsals for a play on the origins of Monster High, in part because of the message, in part because several students participating have become fused and effectively are hybrids themselves now. Hybrid-Fusions with little control over their own bodies, that is, which is why the hybrids offer to each guide a fusion and help them get a hold of themselves again. Sirena becomes the tutor to Lagoonafire, the fusion of Lagoona and Jinafire, whose water-fire duality means the fusion is self-contradictory. Sirena teaches them to find an activity they can meet each other in and use that as focus point, providing an obstacle course in the swimming pool to help them get the hang of it. They are only just done when the school comes under attack by a huge entity created by Sparky. It is specifically out for the fusions, so the hybrids and Frankie team up to lure it back to Sparky's laboratory, and bear witness as Frankie uses her own life force to deactivate it. Sirena joins the other students as they each call onto their bond with Frankie within their own life force to revive her. From then on, the hybrids have a place at Monster High. Freaky Fusion

In "Looks Gil-ty", Lagoona Blue visits the pool and chats with Sirena, admitting she'll miss her friends and Gil once she travels. They see Gil chatting with Lorna, and Lagoona asks him if he wants to go shopping with her. But Lorna says that Gil promised to help her out with a problem. Lagoona lets them go, and Sirena is surprised that she doesn't feel jealous about them hanging out. Lagoona states she's fine, but looks at the two suspiciously...

Lagonna admits to Sirena that she really does feel jealous, espeically since she knows Gil's parents would be glad if Gil dumped her for a freshwater monster like Lorna. Sirena suggests she just talks to Gil about it, but she doesn't want to look like she doesn't trust him. Even though she's starting to lose that trust as she sees Gil and Lorna head for the pool.

Lagoona and Sirena decide to follow the two to an underwater submarine. Sneaking up to the windows, Lagoona grabs a conch shell and presses it to the glass to hear what they're saying. When she hears Lorna say "I don't care if we come from two different worlds, we belong together!", Lagoona jolts in surprise and accidentally breaks the window with the shell, sending water - and the two of them - flooding into the house. They confront Gil, and he tells them what's really going on; Lorna has a boyfriend she talks to online named Finn, who is a saltwater merman, and Gil has been helping her find a way to tell her father about their relationship, since he knows all about the problems she faces from his time with Lagoona. Embarrassed, Lagoona claims she knew all about what they were really doing, and gives Gil the conch shell, claiming it's a gift for him to remember her by when she leaves.

Sirena is part of the Monster High swim team as she and Lagoona put on an amazing diving display during a swim competition between Monster High and a rival school. When Draculaura tells her she's being haunted, it's only when Spectra suddenly leaves after learning of Draculaura's haunting that Sirena is among those ghouls who meet River Styxx and travel to Haunted High, Spectra's old school. Due to her half-ghost scareitage, Sirena is able to enter the school without much trouble, and meet several of the students there, like Vandala Dubloons, Porter "Paintergeist" Geiss, and Kiyomi Haunterly. However, when Clawdeen and the other ghouls who are considered "solids" by the ghost community are discovered by Principal Revenant and her Hall Moanitors, Sirena is forced to retreat back to Monster High for her own safety. When Spectra is captured by the Hall Moanitors and imprisoned in Haunted High, Sirena wants to go back and rescue her, but first had to wait for the other ghouls, that being Clawdeen, Draculaura, Twyla, and Rochelle, to use some of Twyla's father's Boogey Sand to become ghosts as well, thereby exploiting a loophole in Revenant's new rule of no non-ghosts allowed at Haunted High. When they return, they soon reunite with Spectra, Porter, and the other ghosts, but when discovered by Revenant, who wonders how they've become ghosts themselves, Porter is able to hide everyone in a secret room of his for the time being, until he is caught saving Spectra from Revenant and interrogated into revealing the room in exchange for losing some of his Detention Chains. Sirena is soon incarcerated in Detention Chains, and while Revenant and her Hall Moanitors retrieve the Boogey Sand and prepare to imprison all of Monster High's student body in Haunted High after turning them into ghosts as well, Sirena and the others take it out on Porter, only to forgive him when he reveals he stole the key Revenant uses on the Detention Chains, freeing them while taking on the chains himself as punishment for his betrayal. With the aid of the key, they free their fellow Monster High ghost students, like Operetta, Scarah, and Johnny, and Sirena leads them all back to Vandala's ship to return to Monster High. After preventing the Hall Moanitors from turning all of the students into ghosts, and Spectra exposing Revenant as the legendary Red Lady, Sirena stays at Monster High to help Kiyomi with sending the Hall Moanitors on River's skiff back to Haunted High, adding her own half-ghost power to strengthen Kiyomi's window, then returns just in time to witness as Revenant discovers that her own unjust actions have only led to further punishment on herself, and promises to repent and get rid of her chains like they were meant to be removed through good deeds and just actions. Sirena joins in the festivities afterwards as Monster High and Haunted High get to know each other a lot better, with Sirena joining Lagoona and another ghost with diving and swimming during the party that follows. Haunted

In "Boo York, Boo York", She makes a cameo but doesn't do anything note worthy.

In "Great Scarrier Reef", She is seen at Lagoona's party playing with the balloons in the background. 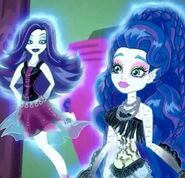 "Are you going to eat that?"

Sirena having constructed a food replica of Monster High

Looking into the auditorium during the dress rehearsal for Mr. Where's play

Sitting down to watch the rehearsal. Sirena chooses to hover instead.

That was not supposed to happen...

While the others are disgusted or horrified, Sirena is enjoying it

Sirena decides to watch the rest of the chaos in 3D

At least Sirena is enjoying this...

Time to offer Frankie their help

Watching Neighthan offer his help to Frankie and her friends

Sirena does not care if Frankie saw them

"You ghouls gotta check out this bug!"

Lagoona amazed by Sirena pulling off a difficult dive without splashing

"Like I said, we did a lot of things together."

Sirena watches as Jinafire lets off too much steam, evaporating the pool water

Yet Sirena does not seem to mind

Sirena watches as Lagoonafire's training under her tutelage pays off

Though Sirena is proud of Lagoonafire's accomplishments...

...she gets distracted by the gargoyle lifeguard's whistle

The hybrids find their new home at Monster High

Add a photo to this gallery
Retrieved from "https://monsterhigh.fandom.com/wiki/Sirena_Von_Boo/cartoon?oldid=344218"
Community content is available under CC-BY-SA unless otherwise noted.