I dream about having a pet one day, but so far that dream has not come true.

Sirena Von Boo is a 2014-introduced and all-around character. She is a hybrid, the child of a mermaid and a ghost, which makes her a mermaid ghost and a student at Monster High. Like her longtime hybrid friends—Avea, Bonita, and Neighthan—, Sirena has a history of going from school to school because she fit in nowhere. As a result, she is acutely aware of her double heritage that is making life so difficult for her. On the other hand, she would not trade her omni-mobility for anything in the world. She can travel underwater, float in the air, and pass through anything, and the possibilities this presents her with are endless. The only downside is that Sirena is easily distracted and the lack of barriers allows her to drift around on a whim without anyone able to follow or find her.

She is voiced by Paula Rhodes in English.

Sirena Von Boo has stark white skin that flows over into the scales of a tail that changes from silver to blue to black at the bottom. Her long, ultramarine hair has lavender streaks through it and part of it is coiled and twisted, the rest flows down past her waist in side curls. She has blue eyes and from the elbow down her skin fades into black. She wears a golden or green one-shoulder top and has several long, black strands of fabric tied around her wrists. Her age is kind of weird because of her ghost heritage. She wears chains around her tail, wears a chain necklace, and wears one earring of two round chains.

Sirena is sometimes described as an "air fin" because she loves to daydream and follow her imagination. She has a go with the flow attitude, and doesn't like to be pinned down. She loves hunting for treasure in the sea and frequenting antique shops on land. This curiosity about the unknown has translated into a love of archeology; she is highly interested in the world around her.

Sirena inherited both the abilities of a Ghost and of a Mermaid:

Being a mermaid, she also has some skillset of a mermaid:

Sirena's father is a ghost and her mother is a mermaid, and the two met underwater in a sunken ship. Their relationship with Sirena is rather complicated as, in fear of getting one of her two scaritages over the other, they hide a lot of things from her, such as the existence of the Ghost World or the celebrations each of the sides has, which doesn't seem to bother Sirena, although she has expressed excitement in finding out this information by herself. There is however an activity that the two families can share without overlapping each other: swimming, one of the reason for Sirena's interest in the matter. 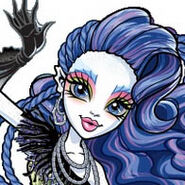 Add a photo to this gallery
Retrieved from "https://monsterhigh.fandom.com/wiki/Sirena_Von_Boo?oldid=349269"
Community content is available under CC-BY-SA unless otherwise noted.