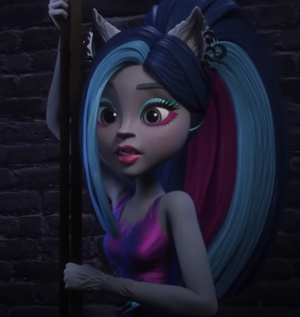 Silvi Timberwolf debuted in the TV special "Electrified", which premiered on March 14, 2017. She is voiced by Katy Townsend in the English version of the cartoon.

Silvi is in trouble with a whole town of humans that are after the "wolf" that has been spotted in their streets. She flees into an alley behind a fence, hoping her chasers will reason a mere wolf can't climb over it. It doesn't work, leaving her cornered. Bad start notwithstanding, the universe is with her as just minutes earlier the Ghoul Squad took notice of her existence and resolved to bring her to the safety of Monster High. While Frankie, Draculaura, and Clawdeen distract the crowd, Cleo and Lagoona help Silvi up on the roof. She is surprised to find that her saviors are a mixed group of monsters, but when the humans below make clear they've not given up yet, she chooses to take her chances with them and the mapalogue instead of mulling over it. It doesn't take long for her to find her swing in her new environment and find her first friends in Woolee and Venus. Alongside them, she joins Deuce, Raythe, Bonesy, and Skelly in forming a band. Their first setback lies in picking the name of the band with Silvi wanting it to be The Howling Army and everyone else something else. The band settles for Howling Thunder and Frightening featuring Raythe and Deuce and the Rolling Bones and Woolee, then gets in a fight over the kind of music they'll compose, which Silvi stays out of. Once more, they settle for everything at once, leading to the creation of "Electrified" in which Silvi and Venus play guitar and provide backup vocals. Electrified

Retrieved from "https://monsterhigh.fandom.com/wiki/Silvi_Timberwolf/cartoon?oldid=335111"
Community content is available under CC-BY-SA unless otherwise noted.