I've been grooming a whole litter of siblings since I was a pup, so I'm happy to be pet-free.

Silvi Timberwolf is a 2017-introduced and all-around character. She is a werewolf and a student at Monster High. She has a passion for music, guitar in particular, and also knows how to get results with nail polish.

In English, she is voiced by Katy Townsend.

Based on her accent, Silvi hails from ”Rotland” or Scotland. She joined Monster High a few months after it opened. The whereabouts of her parents and the rest of her family have yet to be disclosed.

Music is Silvi's main hobby and she is good at singing and playing the guitar. She's a down-to-earth kind of person who dislikes petty arguments that draw the focus from whatever the goal, although she is not immune to getting involved herself.

Silvi is a grey werewolf with an extra fur accumulated around her ears and on her arms. Her eyes are bright blue, matching the shades of blue of her hair. Her hair is long and tied in a high ponytail. Her fashion colors of choice are blue and purple. After her makeover in Electrified (TV special), she has rainbow-streaked crimped hair, a rainbow wolf-print dress, pink shoes with a matching bracelet, collar, and hair tie, and pink lightning earrings.

Like most werewolves, Silvi comes from a large family. It is known that she has "a whole litter of siblings" she helped raise.

The first friend Silvi made at Monster High is Woolee, for whom she did the nails. Woolee was so elated with the result she locked the werewolf into a bear hug. The second person Silvi made connections with is Venus McFlytrap, with whom she later joined Deuce Gorgon, Raythe, Bonesy, Skelly, and Woolee in starting a band named Howling Thunder and Frightening featuring Raythe and Deuce and the Rolling Bones and Woolee. Despite some disagreements on the name of the band and the kind of music they would be playing, the group found common ground and had a good run with their first performance playing "Electrified".

Silvi has no pet and has no desire for one, seeing as she's finally free from care responsibilities towards her younger siblings.

At present, Silvi has no romantic interests. 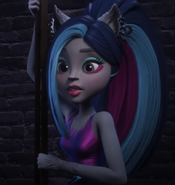 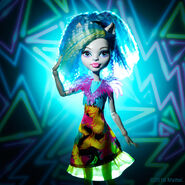 Silvi Timberwolf turning into a wolf 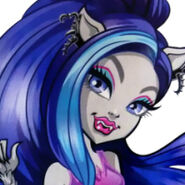 Retrieved from "https://monsterhigh.fandom.com/wiki/Silvi_Timberwolf?oldid=347370"
Community content is available under CC-BY-SA unless otherwise noted.