Seth Ptolemy, also known by his stage name Pharaoh, is a 2015-introduced and cartoon-only character. He is a mummy and a member of the very prestigious Ptolemy family. He appears in the TV special Boo York, Boo York.

Seth has medium brown skin, bright blue eyes, and has short dark brown hair styled with an undercut, and a single spiral pattern on each side. When performing, he wears a tank top, baggy harem pants and an Egyptian-style collar over his bandages. When appearing with his mother, he wears a dark suit and a large gold mask, which hides his face.

Seth is a member of the Ptolemy family, one of the richest and most famous monster families in the world, who live in Ptolemy Tower in Boo York. He is often named the 'Prince of Boo York', but Seth is very humble and doesn't flaunt his wealth around other people. Seth is a talented rapper and dancer, and loves to perform on the streets of Boo York. When in his mother Amuncommon's presence, Seth acts passive, obedient, and pretends to share his mother's dislike for modern culture, causing his peers to view him as weird or odd. In reality, Seth is very much a friendly, out-going, and normal teenager who enjoys having fun and expressing his artistry.

Since his mother doesn't appreciate his style of music, he sneaks out in secret by travelling over the city rooftops and proves to be very crafty in hiding his secret life from her. He also has a passion for poetry, but is considered boring by some people; though since he seen to be very protective of his book and his skills as a singer, Seth is likely faking his lack of talent in poetry and the book contains lyrics for his songs.

Seth fears he'll never get the chance to sing again when he learns his mother is planning to unite his family with the De Niles on the Night of the Comet. After a chance meeting and bonding with Catty Noir, he finally gains the courage to reveal his true self to his mother and rebels against her.

Seth's mother is Amuncommon Ptolemy, the head of his family. Although Seth loves his mother, he resents how she doesn't appreciate his music and modern music in general, and her controlling nature on his life. As a result, he hides his passions from her and eventually became brave enough to openly rebel against his mother's plans for his life. At the end, Seth and his mother are able to reach a understanding with one another and he gains her blessing to pursue his music and his romance with Catty.

Seth meets Catty Noir while performing in the city, and were instantly attracted to each other. The two develop a close bond over their love of music and help each other deal with their personal problems. However, he and Catty had their voices and their affections for each other magically stolen by Nefera, who is determined to betroth him to Cleo. Thankfully, Catty and the Ghoulfriends are able to foil Nefera's plot and return his voice and his love for Catty. By the end of the movie, their feelings for each other are confirmed. 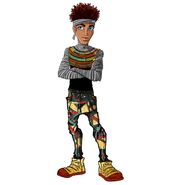 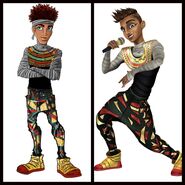 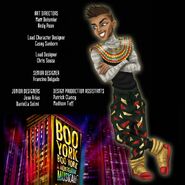 Add a photo to this gallery
Retrieved from "https://monsterhigh.fandom.com/wiki/Seth_Ptolemy?oldid=346636"
Community content is available under CC-BY-SA unless otherwise noted.