Click here to go to the press coverage archive

We keep talking about all of these exciting initiatives that we have been busy working on all summer… so we are excited be able to dive in deeper and share more with you about our partnership with Monster High! For those of you who don't know, Monster High is a fairly new tween brand from Mattel that is based on "perfectly imperfect" teen children of famous monsters.

We gave you a sneak peek at the beginning of the summer that we have partnered with Monster High and left you in suspense as to what we are going to be doing with them. We are so happy that the time has come to fill you in on all of the details about what we're working on with Monster High! One of the most exciting aspects of the partnership is a special animated webisode that we will be featured in – yes, we are becoming monsterfied! Much like we do in schools and communities nationwide, we are holding an assembly within the school walls of Monster High. Those monsters deal with the same issues that girls across the country deal with – insecurities, gossip, rumors, manipulation, power struggles, and secrets. Because of that, we couldn't wait to hold an assembly with the girls at Monster High to create change within the Monster High world as we have within Girl World across the country! Stay tuned for the release of the webisode… but in the meantime, here's a sneak peek! 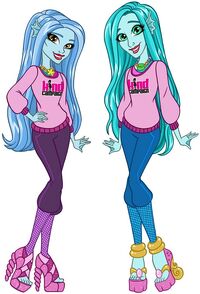 As we are prepping for our tour during Anti-Bullying month, we are excited about three Mother/Daughter Finding Kind Screenings that Monster High is hosting in Los Angeles, Seattle and Atlanta. Monster High is making these available to mothers and daughters in these communities free of charge (hurray!) and we are inviting guests to join in a dialogue about the film with us afterward. We are really hoping to dive into a deeper conversation with mothers and daughters about how they can talk to one another about these issues.

As two struggling but eager filmmakers and non-profit founders, we were so thankful for the partnership opportunity with Monster High. Their marketing team originally heard about us when we were being interviewed on "On Air with Ryan Seacrest" last year. They loved our message and reached out, knowing that our solutions driven approach would be something that would resonate with their fans. Since then we've been working with the incredible team over there to make sure our partnership remains organic for both parties. From the very beginning, we were both on the same page about the importance of protecting the authenticity and private and intimate work we do with schools nationwide. That's why we are so excited to be bringing our work and our message to the halls of Monster High! Initially, we were not as familiar with how to navigate such a large brand full of opportunities for us, but we've felt very supported in working together to integrate KIND's messaging within their world to make the biggest impact. This has been such a huge learning experience for us as young filmmakers, businesswomen and entrepreneurs!

We're so excited that this partnership has inspired conversations about how to further strengthen and amplify Kind Campaign-like themes within future Monster High content, activities and initiatives. The Monster High characters are learning how to embrace and accept themselves and others and hopefully our animated Kind Campaign assembly will inspire the characters and their fans to continue this conversation.

Because they believed in the message behind Kind Campaign and Finding Kind they have made it possible for Finding Kind to have a theatrical release (going on right now in NY and LA)! Even though we feel like we've conquered a lot of ground already, it's still just the two of us and would take thousands of assemblies to near the number of girls that we are going to be able to reach this month alone with the help of Monster High. Monster High already has millions of dedicated followers and we are so excited to be able to tap into these engaged fans to further spread our own KIND message!

Retrieved from "https://monsterhigh.fandom.com/wiki/September_28,_2011_-_The_Daily_Kind?oldid=281152"
Community content is available under CC-BY-SA unless otherwise noted.