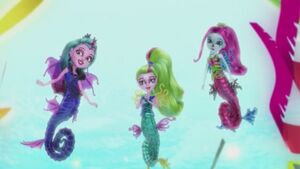 The Sea-Mares are the three small assistants of Posea Reef. They are humanoid seahorses with the traits of a different monster each. One's a vampire, the second a kraken, and the third a skeleton. They have their own language which sounds like indistinct chatter and which is visually backed up with bubbles displaying simple symbols to get the message across. They are shown to play pranks and fool around, like throwing a starfish at Posea Reef

They're mischievous little creatures who help out Posea as much as they friendly mock her.

The sea-mares are water monsters with a sea horse like lower body and an upper body that has traits from other monsters while still looking somewhat human like. Sea-mares are also very small, one of the sea-mares has a dark blue like sea horse body, pale purple bat like fins and, other vampire like traits like fangs and point ears. Another sea-mare has a pale blue sea horse like lower body, having pale green hair with a streak, and tentacles on her back and curve of her sea horse lower half. And lastly the other sea-mare has a pink sea horse lower body and hair, but also has pale skin, and appears to have a lack of a nose much like skeletons lack of a nose.

There appearance is similar to a hybrids appearance being a combination of two different kinds of monsters in appearance. But the sea-mares have not been confimed to be hybrids.

Retrieved from "https://monsterhigh.fandom.com/wiki/Sea-Mares?oldid=343811"
Community content is available under CC-BY-SA unless otherwise noted.