The 'School's Out' doll line is the second subline of the franchise-spanning 'Signature' line of dolls that features the characters in day-to-day, fit-for-school outfits. The 'School's Out' line was released in the middle of 2011 and the characters featured are Frankie Stein, Clawdeen Wolf, Spectra Vondergeist, Cleo de Nile, Draculaura, Clawd Wolf, all of whom were released in Mid June, 2011, and Abbey Bominable and Lagoona Blue, whom were released in Mid July, 2011.

Officially, the 'Signature' line and its early sublines are without names. The first of these sublines came to be call 'Basic' by the fandom. Then an entirely new subline was released a year later. Between the 2010 and 2011 'Signature' sets, five characters are shared. To be able to distinguish between them, the fandom thought up the name 'School's Out' for the second subseries due to a caption accompanying the first photos that reached the fandom. The term 'Basic' was reserved for the first subline and the three non-repeated characters of 'School's Out'. It has become practice among the fans to refer to any doll representing a character's default look as 'Basic', and identify repeat characters by the (sub)line's proper designation. Since this practice is inconsistent and therefore difficult to document, the Monster High Wiki defines 'Basic' solely as name of the first set of eight 'Signature' dolls, and thus all eight dolls of the second set are 'School's Out'.

Since Holt Hyde and Ghoulia Yelps were the last 'Basic' dolls released, they got the short stick as far as promotion and shelf time go compared to the earlier released six. Because of this, the two dolls were re-released in the 'School's Out' subline, for which they received new boxes that were modified to the 'School's Out' design. Since the dolls and diaries remained the same, the wiki considers the two dolls 'Basic' only.

All of the 'School's Out' accessories were exclusive to the line upon its release, but since several have been reused by other lines.

With Spectra and Abbey, their 'School's Out' clothes are their standard outfits, worn or assumed to be worn in most of their fictional appearances. The same is true for Clawd, with the specification that instead of his hat, scarf, and vest, he wears a jacket in the cartoon. The remaining five outfits, for characters that derive their standard look from the 'Basic' releases, have generally shown up twice and both during a party scene: they have been featured in the TV special "Fright On!" and at the end of the webisode "A Perfect Match". Clawdeen additionally wore her 'School's Out' fashion in "13 Wishes" and "Frights, Camera, Action!".

The 'School's Out' line received one commercial, which paid special attention to the releases of Abbey, Spectra, Clawd and Draculaura. 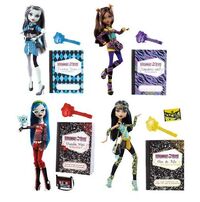 Retrieved from "https://monsterhigh.fandom.com/wiki/School%27s_Out?oldid=325066"
Community content is available under CC-BY-SA unless otherwise noted.