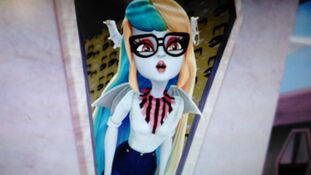 She is a parody of Sharon Stone.

She appears to be a kind and friendly monster, and is usually a good writer and script creator, but sort of suffers from writer's block. This "writers' block" was first seen in "Frights, Camera, Action!", her first and only appearance in Monster High. Scary Stone, or probably Scary, as first name perhaps, looks to the ghouls for help or inspiration for her writer's block when she first comes across them in 'Frights, Camera, Action!'. She also appears to speak in a voice with an American dialect of accent unknown. Her accent may be of Boo York City, the monster equivalent of New York City.

Scary Stone is a gargoyle, as it appears, but her "skin" or more as "rock stone" appears as more white than grey. Her notable gargoyle features are her gargoyle's-ears-looking ears and her gargoyle-appearing wings. Her wings are medium grey, and her ears are the typical shape of a gargoyle's ear. Her ears appear kind of white-grey, and are located in a way almost on top of her head, but more as at the sides, near her forehead temples, unlike other gargoyles. She wears glasses, which just like Clawdia's glasses, DO NOT have the stick parts at the sides to the ears to help them stay up. Her eyeglasses are black-framed, and possibly black-rimmed glasses that are thick-rimmed, thick-framed and thick-lensed. She has eyes that are sort of deepish toned-out brown kind of the color of sepia as apposed to black and white shade of grey but darker brown with an orange tint to them, and medium-colored blond hair with lighter blond highlights as it appears, and a teal-turquoise streak in her bangs fringe covering her forehead as hair, which has hair that reaches the right side of her hair and the rest of hair is in dark blue. Her hair is long and reaches her back, and she has some bangs as fridge sculpting the sides of her face, specifically her cheeks, and she wears auburn-almost-maroon - burgundy eyeshadow, which the shadow appears to have two tones, and her lips are pale pink peach which may be lipstick. Her glasses have two "hold-sticks" for the eye frames as to hold the between of her eyes together as "frame holders". Her right ear is pierced with two simple gold earring ear-hoops, that are small ones, and her other ear, her left one, has a golden-colored ear-piercing chain that connects to the upper part of the ear to the lower part of it. She has a small, cute, pert nose, and wears director-styled clothing. As clothing wear, her attire consists of a white blouse-looking shirt with small buttons that has either mid-quarter-length sleeves or rolled-up sleeves; a director's-scarf-looking scarf that is coral pink to salmon pink with dark black stripes, a brown director's barret with two white-pink buttons at the right side, black jean-looking/denim-looking pants that are rolled-up at the bottoms of the parts of her legs, and her shoes are hot-pink, bright-dark-pink stylized as sneakers, not dissimilar to the design of Operetta's shoes, with wedges and toe openings. She has slightly-long, black nails as nail polish, and she has light-blond thin-shaped eyebrows and long dark lashes.

Retrieved from "https://monsterhigh.fandom.com/wiki/Scary_Stone?oldid=346312"
Community content is available under CC-BY-SA unless otherwise noted.