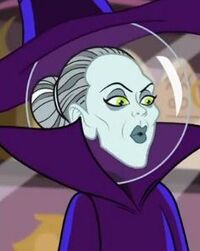 During the Gloom Beach mashionals tournament, Scary Murphy singled out the Monster High fearleaders as her protegées and forced them to do seemingly pointless jobs with the secret intent to familiarize them with a large set of moves they could use in their routine (since they were the Wild Card team). However, her bossy and offensive attitude left almost the entire Monster High fearleading squad to resent her, with Cleo being the only one to keep faith in her.

After the MH-fear squad won the tournament with Scary Murphy's moves, Scary Murphy became much nicer, and friendlier to them, explaining why she had been so tough on them before. However, when they were in a funk during Rising From the Dead, Scary Murphy went back to her harsh attitude to force Cleo to take back her responsibility as the squad captain and fight her way back to the alpha fearleading position.

Scary Murphy wears a long dark purple cloak with a dark blue witches hat. Her head is in a glass bubble, possibly a Gazing Ball, better known as a Crystal Ball used by fortune tellers. She has no actually body but her cloak acts as her hands sometimes.

Scary Murphy takes on the role of coach of the Fear Squad. Her first instruction is for them to do a number of chores. Witch Trials

At the Gloom Beach competition, the Fear Squad is forced to improvise and Cleo puts a routine together using the movements she used during the chores. The Fear Squad wins, prompting Scary Murphy to admit she acted like she did to bring out their best. Road to Monster Mashionals

Retrieved from "https://monsterhigh.fandom.com/wiki/Scary_Murphy?oldid=349367"
Community content is available under CC-BY-SA unless otherwise noted.