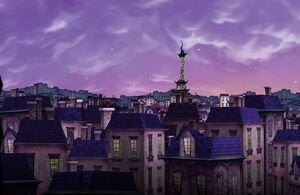 Scaris, also known as Paris, is the capital of France and has a reputation of being the cultural centre of the world. Scaris is nicknamed the City of Frights and one of its supposed neighbour-cities is Granite City.

Rochelle Goyle, Garrott du Roque, and Catrine DeMew were all born in and grew up in Scaris. Rochelle and Garrott met during this time and became a couple, Garrott going so far as to cultivate his own type of rose just for Rochelle. Despite being a Scarisienne, Rochelle attended Granite City High until the age of 415, at which point she chose to broaden her horizon and transferred to Monster High in the USA.

Garrott and Rochelle kept in touch, but Garrott too worked on his future. He was discovered by the world famous fashion designer Moanatella Ghostier and offered to become her apprentice. Garrott eagerly took the offer, but soon found himself imprisoned in the Catacombs of Scaris, where he was forced to ghost-design for Ghostier. Given the bleak circumstances of his fate, Garrott's inspiration dwindled quickly and after only months Ghostier saw it necessary to replace him. For this, she researched aspiring fashion designers from around the world and found and invited Jinafire Long, Skelita Calaveras, and Clawdeen Wolf, the latter coincidentally a schoolmate and friend of Rochelle.

For her journey to Scaris, Clawdeen arranged her friends to come with her. Rochelle too came along as guide as well as host, since the group would be staying at her grandmother's place. While Clawdeen went to get herself an apprenticeship at Ghostier's atelier and met Jinafire and Skelita, Rochelle went in search for Garrott, who had suddenly stopped writing her letters. Due to a trail formed by one of his unique rose branches, she eventually discovered his whereabouts in the catacombs just as Clawdeen was locked up there as well to replace Garrott. With the help of their still-free friends the group escaped, and led by Clawdeen who began to work on a plan for revenge. Ghostier would be hosting a fashion show that evening using Clawdeen's apprentice designs, so she and the other three designers created their own line last-minute and hijacked the fashion show from Ghostier. Needing attention to remain in existence, crooked fashion icon went up in nothingness soon after. The group enjoyed their remaining days in Scaris unbothered.

Retrieved from "https://monsterhigh.fandom.com/wiki/Scaris?oldid=345084"
Community content is available under CC-BY-SA unless otherwise noted.