Scarah Screams debuted in the cartoon series in the Volume 1 webisode "Jaundice Brothers", which premiered on May 05, 2010. She is voiced by Erin Fitzgerald in the English version of the cartoon.

When Radio KBLOOD announces a contest of which the prize is that the Jaundice Brothers come play at the winner's school's homecoming dance, Scarah helps Frankie put together a tape to send in. As luck has it, they win the contest. Jaundice Brothers

Scarah attends Monster High's 1361st Annual Charity Talon Show, where she is a spectator to a great performance by Cleo and an even greater by Clawdeen. Talon Show

Scarah auditions for a role in the school production of Hamlet, but is rejected. Clawditions

An eyeball fight breaks out during Biteology and Draculaura participates. Freedom Fight

Scarah votes for Clawdeen as the new Scream Queen following a text campaign promising a school carnival if she wins. Rumor Run Wild

When Frankie tries to stop Draculaura's crush with the aid of electricty, Scarah ends up shocked too. Horrorscope

When Cleo de Nile overuses her mind-control idol, Scarah is one of her victims. Idol Threat

Scarah takes care of an egg for a whole week as an assignment for Mr. Hackington's class. Hatch Me If You Can

As a former backgrounder, Scarah also does nothing in particular in the webisodes "Blue Lagoona", "The Hot Boy", "Bad Scare Day", "Photo Finish", "Bad Zituation", "Shock and Awesome", "The Good, the Bat and the Fabulous", and "Date of the Dead".

Scarah is one of the people approached for a FrightTube view by the Fear Squad. Falling Spirits

Scarah is among the onlookers rooting for the Fear Squad to get their one million hits on FrightTube. Fatal Error

Scarah roots for her friends at the Gloom Beach competition. Road to Monster Mashionals

Boas are the hip new thing to wear and so Scarah got herself one. Queen of the Scammed

Friday the 13th claims many victims and Scarah runs to not be one of them. Frightday the 13th

She waits in line for Cleo to sign her copy of the fearbook. Fear the Book

As a former backgrounder, Scarah also does nothing in particular in the webisodes "Why We Fright" and "HooDoo You Like?".

She is one of the few ghouls to still raise their hands after the second question, showing that she is not self-centered. Kind: The Shockumentary

Heath passing a flirt to Scarah while walking through the hallways, unaware when he accidentally drops his notebook. Hoodude picks it up and runs after Heath to give it back, much to the latter's horror. Indeed, Hoodude trips over another student's tail and falls down the stairs, causing Heath to do so as well. Once they've recovered, Heath explains that as a voodoo doll, Hoodude should not touch other people's stuff, since whatever happens to him while he holds them happens to the person who owns the item. Hoodoo That Voodoo That You Do

I Know What You Did Last Fright

Clawdeen tells Frankie that since she is Hoodude's creator, she has to fix him. Frankie retorts that she is not a mindreader, which reminds them all of someone who is: Scarah Screams.

Scarah is fetched, but because Hoodude's mind is not as coherent as most, she can't reach further than his sense of sadness and tells Clawdeen and Frankie they'll have to go inside Hoodude's mind. They enlist Ghoulia for this, who prepares a machine that'll get them inside Hoodude's head. Scarah gives them a quick tour before they reach the memory center, where they learn that Hoodude's sad because he tried to run for Student Disembodied President, but was made fun of by Heath Burns. Scarah explains that they need to boost his self-esteem and takes the others to Hoodude's emotion center, where she repairs the torn self-appreciation cable.

The trio returns to their own minds and find that Hoodude's depression is all gone. Hoodude thanks Scarah as he practically dances out of the laboratory. The girls watch him go, wondering if he really is better now. Hoodude runs into Heath in the hallway and tells him that he can't hurt him anymore. To make a point, Hoodude hugs himself, driving several needles on him deeper into his body, which is felt by Heath. As Hoodude kisses himself, oblivious to Heath's pain, Scarah suggests that they might need to make a few more tweaks. Undo the Voodoo

Cleo, Draculaura, and Frankie discover that Scarah Screams harbors feelings for Invisi Billy. They ask her why she doesn't just go talk with him about it, and she explains that she might hear him think he doesn't like her, which she knows she couldn't handle. As Scarah leaves somberly, Clawd meets up with Draculaura, who immediately spills everything Scarah just said. Clawd promises to talk with Invisi Billy to see if he can be prompted to act.

In the creepateria, Clawd asks Invisi Billy about Scarah and finds that he likes her too, but that he is afraid she doesn't like him and will respond badly if she'd mindread that he likes her. Clawd reports back to Cleo and Frankie, and though it seems like they are stuck, Frankie develops an idea to get around the problem. They prepare a picnic for two at the cemetery and Clawd tells Invisi Billy that Scarah has a date there with another boy. Meanwhile, Cleo tells Draculaura that Invisi Billy has a date at the cemetery with another girl. They agree that they should not tell Scarah, but as they part ways, Draculaura encounters her. Draculaura desperately thinks of not thinking of Invisi Billy's date, which Scarah picks up.

As bet on, Scarah and Invisi Billy both make their way to the cemetery that evening to find out who their rival is. To their surprise, they find no one but their equally surprised crush. It doesn't take them long to figure out they've been tricked. Grateful, amused, and happy, the two finally confess their mutual feelings. They have their picnic together and make sure to meet up with and thank their friends the next day. Scarah-Voyant

In need of Scarah's mind-reading powers, the shadows capture Invisi Billy and threaten to hurt him if Scarah doesn't cooperate. Invisi Billy begs her to help him, so Scarah complies. 13 Wishes

Scarah is on Team Edweird during Cute Court. At the premiere party in honor of the new Vampire Majest movie, she helps Spectra by keeping her telepathically up to date while the latter reports to the camera. Frights, Camera, Action! 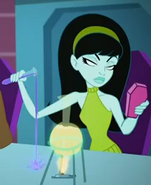 Add a photo to this gallery
Retrieved from "https://monsterhigh.fandom.com/wiki/Scarah_Screams/cartoon?oldid=349254"
Community content is available under CC-BY-SA unless otherwise noted.