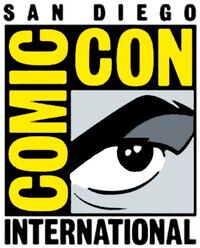 At San Diego Comic-Con International, usually one of the rewards for visiting the stands and attending events is access to exclusive merchandise. With Monster High's presence at the convention, it is no different. The highlight of exclusive Monster High merchandise to obtain is the yearly exclusive doll, but it's far from the only thing. Tote bags are a recurring piece of merchandise too, but everything else is changed each year.

The exclusive doll of 2010 is a greyscale version of the 'Basic' Frankie Stein doll and its accessories, but with brand new doll logs.

The laminated non-woven polypropylene tote bag of 2010 measures 16" by 20" by 2" and depicts Frankie Stein from behind a partially opened zipper on one side. The other side is black with a random grey print and sports the Monster High crest large in the center. The handles are black. 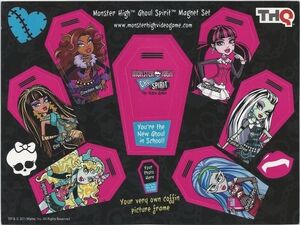 The exclusive doll of 2011 is a Dead Fast-themed Ghoulia Yelps doll.

There are two tote bags available, both made of laminated non-woven polypropylene and both measuring 16" by 20" by 2". One depicts Ghoulia Yelps reading Dead Fast #0 on one side, while the other tote bag depicts Dead Fast running forward with Ghoulia looking at him in the background in amazement. The rest of the tote bags' design is the same for both. That is, the other side features a pattern of pink, blue, black, and white diamonds, of which the blue one sport a skullette. A large version of the Monster High crest covers the bag in the center. The handles are black.

Other merchandise available are an autograph print screencapped from the opening shot of "Horrorscope" and a magnet sheet dedicated to the announcement and release of Ghoul Spirit. The magnets on the sheet depict the original six female characters on a pink locker background, and a seventh is left open for a person to add a picture of themself. 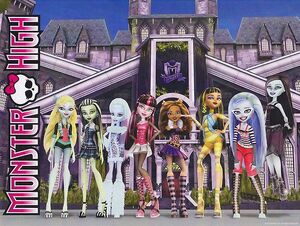 The exclusive dolls of 2011 are a Scarah Screams and Hoodude Voodoo, which are sold as a 2-pack.

The laminated non-woven polypropylene tote bag of 2012 measures 16" by 20" by 2" and depicts the entire student body up to that point as a class photo. This same image is also included with the Picture Day booklets. The other side depicts the four main characters of the Ghouls Rule series in their CGI Ghouls Rule getup. The handles are black.

Other merchandise available are black sunglasses with "Monster High" printed in white across the arms, an autograph print dedicated to Ghouls Rule depicting the primary eight female characters in CGI, facial tattoos of the Design Lab Add-On Packs, and a Ghoulfriends Forever preview booklet.

The exclusive doll of 2013 is a Power Ghouls edition of Wydowna Spider, also known as Webarella.

There are two tote bags available, both made of laminated non-woven polypropylene and both measuring 16" by 20" by 2". One depicts a stylized Webarella moving forward as she pushes spider webs aside, while the other tote bag uses the same image as the DVD cover of 13 Wishes. The rest of the tote bags' design is the same for both. The other side features the same class photo as the 2012 tote bag, only updated with the characters newly introduced since then. The handles are black.

Other merchandise available are red glasses modeled after Ghoulia's with six plastic gems laid in on each side, an autograph print of Webarella swinging on her web, and a neck tie a la Frankie Stein with the Monster High logo towards the tip.