Rotter debuted in the cartoon series in the Volume 1 webisode "Idol Threat", which premiered on December 16, 2010. He is voiced by Yuri Lowenthal and Cam Clarke in the English version of the cartoon.

Cleo de Nile considers a B+ too low for the quality of the work she did for Mr. Rotter's class, but Rotter retorts that he nevers gives A's. In order to get her rightful A, Cleo uses an idol with persuading powers on him with positive results. Idol Threat

Rotter is manipulated by Toralei to believe the Fear Squad is preparing a prank and thus set to punish them if anything would happen, such as a stinkbomb going off, during the graduation ceremony. Fear the Book

The Fear Squad becomes aware of Toralei's plan and prevents the stinkbomb to be dropped. To get back at the werecats in the same swing, Ghoulia hacks their student files and gives them extra math credits. Rotter promptly sends the trio off to math camp for the duration of the entire summer. Desperate Hours

During one of his first classes in the new school year, Rotter gets hit by a snowball thrown by either Frankie Stein or Abbey Bominable. He sends them both to Headless Headmistress Bloodgood's office. Back-to-Ghoul

After Dead Languages, Frankie and Draculaura talk about how all the languages Rotter teaches sound alike, which Draculaura follows up with a mocking imitation of their teacher. Mr. Rotter notices, but assumes she's trying to replicate today's lesson and so gives her the advice to let her 'R's roll. Fright On!

Mr. Rotter helps organize a class trip to Monte Scarlo. Just before departure, he hears Frankie Stein sneeze and informs her that she isn't allowed to come along if she is sick. Uncommon Cold 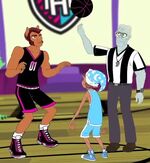 Why Do Ghouls Fall in Love? Escape From Skull Shores Friday Night Frights Ghouls Rule Scaris: City of Frights From Fear to Eternity

When Robecca shares about her father for the Scare-itage assignment, Rotter is reminded that Hexiciah was one of his teachers when he studied in Monster High. When the ghouls travel back to 1814, Frankie stops by to attend Hexiciah's class - during which a teenaged, scrawny Rotter rushes in as he's late. Back then he wore a tall top hat which hid his hair that was as tall as his hat. Although in the present, he mentions he's Hexiciah's favorite student, in 1814 itself Hexiciah told him he was his least favorite. Freaky Fusion 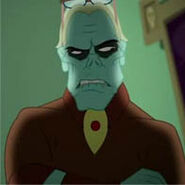 Add a photo to this gallery
Retrieved from "https://monsterhigh.fandom.com/wiki/Rotter/cartoon?oldid=349487"
Community content is available under CC-BY-SA unless otherwise noted.