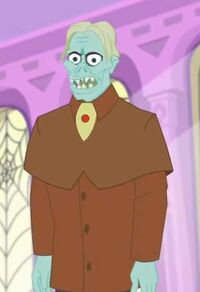 Rotter is a 2010-introduced and cartoon-only character. He is a phantom and a teacher at Monster High, having been a student there in his younger days. He officially teaches Dead Languages, but also at times Ge-ogre-aphy and Physical Deaducation. Rotter is a driven teacher who has high standards for his students to meet, to the point that acquiring an 'A' in his class is an impossibility.

In his first appearance, he was voiced by Yuri Lowenthal. Currently, he is voiced by Cam Clarke.

Mr. Rotter believes in order and has little patience for students that try to cause chaos. He is, however, not a strict teacher and enjoys to spark enthusiasm for both his classes and the other ones in the students. This means that sometimes Rotter fails to understand when students are not enthusiastic about some of the classes. He is known for never giving 'A's.

Rotter has grey-to-green skin (sometimes pale blue as well), has a face that resembles The Phantom of the Opera from the 1925 movie of the same name and sandy hair. He is usually dressed in a brown coat.

Retrieved from "https://monsterhigh.fandom.com/wiki/Rotter?oldid=349490"
Community content is available under CC-BY-SA unless otherwise noted.