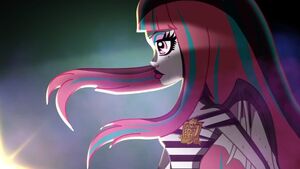 Rochelle Goyle debuted in the cartoon series in the Volume 3 TV special "Escape From Skull Shores", which premiered on April 13, 2012. She is voiced by Erin Fitzgerald in the English version of the cartoon.

Rochelle is initially happy to be given the position of safety officer, but her mood sours quickly as she is forced to take action against many of her friends. Deeming herself unfit for the task, she returns to Headless Headmistress Bloodgood's office to give up her badge. She is welcomed by all her friends, revealing it was all a test and that she passed. The Halls Have Eyes

Rochelle auditions for the part of lead dancer in an upcoming school play, but her weight makes it unlikely she'll be chosen. Invisi Billy comes to her aid by acting like her invisible dance partner, thus making her moves more graceful. Rochelle gets the part and thanks Invisi Billy. Fright Dance

Hackington has his students, among which Rochelle, bring their most precious possession to school and give a presentation about it. Scare-itage

Rochelle usually is the one to take Frido, the class pet, home with her during the weekend, but she has the Gargoylympics to go to this particular weekend. As such, she's looking for someone who can take care of him this time. Draculaura wonders aloud who would say no to "such a luxurious coat", which Cleo overhears. She immediately volunteers, thinking she'll get a coat, but doesn't back out when that turns out not to be the case. Rochelle instructs her to abide by three rules: never give Frido cheese to eat, keep him warm, and never let him near electricity. Cleo is a little overwhelmed, but her friends offer to assist her.

With all three rules broken, Frido gets hyperactive. Cleo gets a call from Rochelle, whom she lies to that everything is going well. To her horror, Rochelle announces she'll come get Frido in a moment. The girls quickly run after him, only to find him in the middle of the living room as a skeleton motionless lying among his shedded fur. As the girls are mourning, Rochelle steps into the room. They try to apologize and console her for the loss of Frido, but Rochelle assures the rest of the girls that Frido's perfectly fine--as it would seem, Frido's not dead: he's just hibernating (basically sleeping). Rochelle elaborates by explaining that since the girls had (unintentionally) broken the rules she had set out for them, it just made Frido start his hibernation process a week earlier than he normally would've (Frido then briefly wakes up, revealing that Rochelle's telling the truth). The girls, especially Draculaura, are relieved by this. Royal Pest Sitter

Rochelle pushes herself up against her locker to avoid being trampled by Nightmare. Escape From Skull Shores

Rochelle is a Skultimate Roller Maze player for Granite City High, until Rocco makes sexist comments, then reveals that she's actually a female and requests an official transfer to become a Monster High student. She ultimately helps the team win the championship match. Friday Night Frights

Rochelle wants payback against New Salem High for their attack on Monster High and so joins Cleo's revenge squad. Though she participates in the planning, she doesn't go along on the mission. Ghouls Rule

Rochelle and Twyla are enjoying the swim meet that Sirena and Lagoona are particpating in, but Rochelle is upset at how, being a stone gargoyle, she would just sink to the bottom of the pool. She is amongst the students who get Spectra's latest blog regarding the lie from Toralei about the Wolf siblings having were-fleas. Later on, Rochelle is among the ghouls who Draculaura turns to for help when she finds herself being haunted by a ghost and following Spectra back to her old school, Haunted High. When Spectra is captured to be incarcerated in Haunted High by Principal Revenant and her Hall Moanitors for bringing "solids," or non-ghosts, to the school, Rochelle becomes a ghost using Twyla's father's Boogey Sand to go back to Haunted High and save her. However, while looking for the right sand, Rochelle ends up being the victim of several other sands, leaving her as a blob monster after the last one before being turned into a ghost with the right sand. After being taught how to control her ghost form by Vandala and River, Rochelle is able to do what she could not do as a stone gargoyle and takes a dive into Haunted High's swimming pool, something she always wanted to do. Later, she and the other ghouls are able to take cover in a secret room belonging to Porter, but he apparently sells them out to Revenant, and Rochelle is incarcerated with Detention Chains, until Porter reveals he swiped the key Revenant uses on the chains, and transfers the ghouls' chains to himself as punishment for his betrayal. Rochelle frees her fellow Monster High students incarcerated at Haunted High, returns to Monster High, and helps Kiyomi with sending River's hijacked skiff and the Hall Moanitors back to Haunted High. When she returns there, Rochelle is witness as Revenant, revealed to be the Red Lady of ghost legend, repents for her past crimes and promises to lose her chains through honest means from now on. Rochelle is returned to her normal, stone gargoyle form, and joins in the celebrations of the newfound friendship between Monster High and Haunted High. Haunted

Rochelle sitting on a bench waiting for Manny, Heath, and Slo Mo with her clipboard.

Robecca helps Rochelle to her place from getting off-balance.

"Come on, I got an idea!" Invisi-Billy holding her hand to help Rochelle (in cute pink cheeks, surprised). 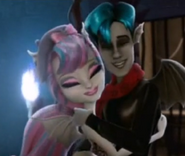 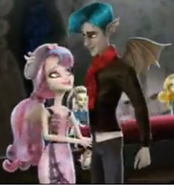 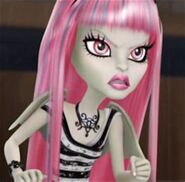 Add a photo to this gallery
Retrieved from "https://monsterhigh.fandom.com/wiki/Rochelle_Goyle/cartoon?oldid=349240"
Community content is available under CC-BY-SA unless otherwise noted.