Rochelle Goyle is a 2012/2017-introduced and all-around character. She is a gargoyle and a student at Monster High. She used to be a student at Granite City High in Scaris, but she wanted to challenge herself and broaden her horizon, so she left for the Boonighted States of Scaremerica. While elated about the experience, she does miss home and her boyfriend, Garrott du Roque, in particular. At Monster High, Rochelle's guardian qualities got her the position of Head of the Student Safety Team, which she is proud to fulfill at full capacity. The few flaws to her functioning is that she's a tad aggressive and regularly overprotective to the point of being controlling. She is dutiful, though, which motivates her to work on improving herself.

In English, she was voiced by Erin Fitzgerald.

In Latin American Spanish, she was voiced by Melissa Gedeón.

By Adventures of the Ghoul Squad and the reboot or Generation 2, she is now voiced by Cassandra Lee.

Rochelle is from Scaris, France. She occupied a roof near a great cathedral. For most of her life, her social atmosphere has been occupied solely by other gargoyles, which began to displease her as she reached adolescence. Unlike most other gargoyles she knows, who are content to minimize what they learn of the world in order to never feel like they are missing out, Rochelle wants to know all there is to know and chose Monster High as her stepping stone after several years of considering the pros and cons. Her parents, who are supportive of her, approve of her decision.

Due to the sedating environment she grew up in, Rochelle has a philosophical disposition towards the possibilities of life and the choices people make to take them but also to not take them. She isn't safe from her own scrutiny either, as she is perplexed by how swiftly and deeply she has fallen in love with Deuce Gorgon despite knowing he is already in a committed relationship with Cleo de Nile. One thing the two have in common is a love for cooking. Deuce Knows His Way UHHH-round the Kitchen A Night in Scare-adise: Prom 2014

Rochelle is an aggressive individual. Even little things can provoke her into a confrontation that might not be the better solution. This aggression most often presents itself when one of Rochelle's family or friends is at risk of being harmed. Rochelle is fiercely protective of her loved ones and will go far to keep them safe. But while well-meant, it isn't always appreciated, because Rochelle's protectiveness sometimes denies her loved ones their own personal independence. Rochelle doesn't mean to do this though, and has trouble coping when the realization of her error hits her. Confident about pointing out others mistakes with no problem, Rochelle claims she has a chip on the shoulder, suggesting she has a self-righteous feeling about her self, always bringing up how she is disadvantaged. Otherwise, she is a loyal and hard-working girl, as well as a responsible individual, which sometimes makes her do things she doesn't enjoy. Her strict ways, gargoyle protective nature and almost stone-cold way to handle things has gotten her a place as the Main Hall Moan-itor of Monster High, as well as other security related responsibilities.

She seems to have taste in combining modern chic with older, classical elements, much like Draculaura. She has long, pink hair with pale teal streaks running through it. Sometimes, she wears hair in a ponytail or a bun. Her face is very animal-like, complete with big pink eyes and a large nose. She has clawed hands, small stony wings and wing-shaped ears in the top her head. She is also made entirely of stone, which makes her unable to do certain activities, such as dancing and swimming.

Rochelle is a gargoyle and holds what's assumed to be all-gargoyle abilities:

Rochelle comes from a two parents-home, but nothing else is known about her parents, other than the fact that female gargoyles lay eggs. She also has a grandmother living in Scaris, who provided Rochelle and her friends with a place to stay in "Scaris: City of Frights".

According to her bio, her best friends are Ghoulia Yelps and Robecca Steam. The friendship with Ghoulia was formed when Rochelle warned her of the werecat twins' prank, which would have caused her to travel through potholes, Ghoulia thanked her for her warning and they became friends. Rochelle became friends with Robecca when she was roller skating, when the obstacles were turned on, she was unable to fly (in certain obstacles), Robecca saved her from falling into a pit of water.

Her pet is a gargoyle griffin named Roux and she has belonged to Rochelle from the time she was hatched.

Rochelle Goyle have a boyfriend named Garrott du Roque in scaris, Rochelle Goyle also has a crush on Deuce Gorgon Despite having a boyfriend, Rochelle is romantically inclined and without Garrott's company a tad needy. As a result, Rochelle has developed feelings for Deuce Gorgon, whom she met when she was late for class and bumped into him in the halls of Monster High. Deuce lost his glasses and was surprised to find gargoyles are immune to his gorgon powers. Rochelle, meanwhile, got a good look at him and his beautiful eyes and instantly fell in love with him, most likely because his green eyes reminded her of Garrott's. Though she knows Deuce has a girlfriend whom he is very loyal to, she's not ready to give up on him yet, and keeps looking for ways to continue to see him. For example, she had her pet, Roux, steal Deuce's casketball to lure him to her, so they could have a chance to get to know him better and talk alone. Rochelle has discussed her feelings about him with her friend, Robecca Steam, who disapproves of her pursuits, fearing for her friend is in for "the inevitable heartbreak". 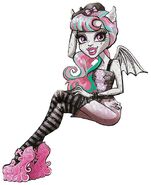 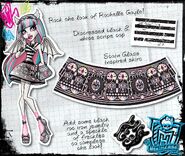 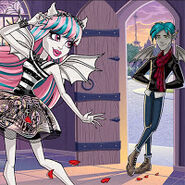 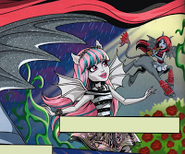 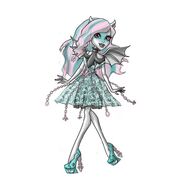 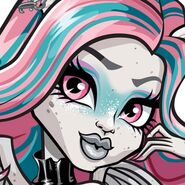 Add a photo to this gallery
Retrieved from "https://monsterhigh.fandom.com/wiki/Rochelle_Goyle?oldid=351900"
Community content is available under CC-BY-SA unless otherwise noted.