Start a Wiki
Rocco is a 2013-introduced and cartoon-only character. He is a gargoyle and a student at Granite City High. He is the leader of the school's SKRM team, and a vicious one at that. Rocco has no problem cheating if it turns the situation in his favor, which earns him the respect of Toralei Stripe, who ultiamtely becomes his girlfriend.

In English, Rocco is voiced by Evan Smith.

The scene then flashes to and stays at the race between Monster High and Granite City, in which Rocco, the leader of the gargoyle team, grabs one of the camera bats, and Gary, his fellow teammate, sneaks up from behind Deuce, taking his glasses off and they turn the camera bat to stone, to leave no evidence of their cheating. Rocco and Gary then knock over Deuce and Gil, leaving them in the dust whilst chasing after the rest of the team.

Clawd and Rocco are basically neck and neck during the course, determined to win for their school. Rocco and Gary then notice Heath and Manny and are somewhat distraught, only before Rocco declare that they might as well finish off Monster High who, according to him, 'plays like a bunch of girls' (this statement, oddly enough, saddens the completely masked player behind them). After going through yet another course, Gary then pulls out a red cloak from almost nowhere, obviously causing Manny to become infuriated and skate furiously after it, thus ramming straight into Heath and the both of them are out. One of the Granite City players, the masked one, is startled and trips over them, and is left behind by the team, who yet again, cheats; this time more discreetly. Whilst neck and neck with Clawd, one of Rocco's skates mechanically remove a wheel from Clawd's and the last member of the MH SKRM Team falls to the ground right before crossing the finish line, thus allowing Granite City to win the game.

Days later, the school continues to fall apart, everyone even more miserable than before. Abbey, Draculaura, and Frankie realize this and then, out of the blue, Frankie hatches up a plan to recruit new members for the SKRM team, so that way MH can beat Granite City and win back the crest! After a bit of reluctance, the ghouls round up almost every boy in the school and judge them for the skills needed in Skultimate RollerMaze; agility, strength... and the ability to skate, most importantly. Whilst doing this, Ghoulia is in the SKRM track, looking for evidence that the Gargoyles cheated, however, a certain something distracts her. A tiny piece of metal, and as of now, it's unknown as to what it is.

The gargoyles begin to mock the new outfits, but the masked player on the team reveals that she is, in fact, a ghoul. Rochelle Goyle announces that she transferred from Granite City to Monster High. She takes Frankie's spot on the team. The ghouls enter a round robin tournament and eventually make their way up the leader board until they qualify for the final match between Granite City. Instilling the school with pride, the ghouls are now wildly popular and even gained the respect of Manny and Heath, who even volunteer to be the team's new cheerleaders. During practice, Clawd fears that his intense training won’t be enough to defeat Granite City.

The final match against Granite city is intense. The gargoyles try to muscle the ghouls, but they use the agility and Abbey's ice powers to avoid many pitfalls.

Operetta then tackles the two gargoyles, while Rochelle slingshots Draculara to the front with Rocco (thanks to a sonic blast boost from Operetta). In a photo finish, Draculaura wins by a leg. It is revealed that it was Clawd’s plan all along. Toralei couldn't pass up the chance to betray the Ghouls, and Granite City couldn’t pass up the chance to cheat. Now the champions, they win back their crest, thus restoring the school from its dilapidated state. They are also entitled to Granite Highs crest, but Frankie realizing the futility of "traditions" especially ones that cause suffering to others, refuses to accept the crest since it will also cause Granite High to decay. Friday Night Frights

Rocco is a ruthless gargoyle with his mind always set on victory. Not surprising, he's the leader of his school's Skultimate Roller Maze team, long known as one of the best in the world. Through violence, bullying, and occasionally cheating, he keeps his team at the top, and in return earns their respect.

Rocco cannot deal with loss very well, but he acknowledges defeat if it happens. Outside of competition, he actually has a friendly disposition, though his arrogance still shines through.

Rocco is a large, pale grey gargoyle. He has a prominent chin and two fangs protruding from his lower jaw. Rocco sports a blue mohawk and has a piercing in his left ear. He also has large wings on his back.

Rocco's parents are likely gargoyles too. 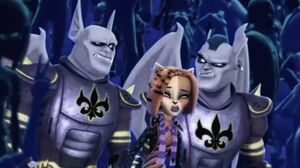 Rocco's closest friend is his teammate Gary, who calls him Roc, and appears to be on good terms with the rest of the team too.

Rocco is in a relationship with Toralei Stripe from Monster High. Supposedly, their mutual penchant for playing dirty is what attracts them to each other.

Retrieved from "https://monsterhigh.fandom.com/wiki/Rocco?oldid=348841"
Community content is available under CC-BY-SA unless otherwise noted.