A robot is a type of simulacrum with a few definitions of its own. Robots are usually made of metal, but organic components fall within the definition too. One thing that clearly sets robots apart from other simulacrums is that they have an internal system explaining their working rather than owing their selves to magic or divine approval. Related to this is the fact that a robot does not have to be sapient or even sentient to be a robot, unlike other kinds of simulacrums. If the internal system exists, it doesn't have to possess awareness to be a robot, although that raises the question of what separates robots from other kinds of machines. Usually this border relies on the complexity of tasks the machine is capable of and how close its form is to an organic design.

Robots go by a number of terms coming from a history of trying to settle on one and some of them have grown to mean slightly different things. In all, the terms are "robot", "android" and co, "maschinenmensch", and "automaton".

The word "robot" — as well as a female-specific variant "robotess" — was introduced in 1921 by Karel Čapek through his play R.U.R.. The robots of the play are wholly organic and easily mistaken for human beings, but artificial nonetheless. They are created as several components later assembled into one functional robot. Čapek has credited his brother with coming up with the word, which is taken from the Czech word "robota", which refers to forced labor as part of serfdom. The play was highly popular and was in short time translated into many languages, introducing the term "robot" in each one. Possibly due to its thematic connection of servitude, "robot" crossed over to and ended up replacing earlier words for mechanical beings.

One of those earlier words is "automaton", which dates to the 8th century BCE. The word is Greek, being composed of "auto-" from "autos" ("αὐτός", "self") and "maton" ("ματον", related to "menon"/"μένον", which means things like "mind", "drive", "purpose", "spirit", etc.), thereby being translatable as "self-acting". In Ancient Greece, the word referred to several mobile metal statues said to exist to serve royals and gods and the word remained the primary word for such creatures until "robot" came into the scene. Due to this development, "automaton" failed to become tied to post-19th century robots and as such has become a term principally to refer to non-electronic variations with an emphasis on clockwork-style robots.

"-oid" is of Greek origin too, coming from "eidos" ("εἶδος", "shape"). It is commonly added at the end of other words to indicate "shape of [word]". A few of these "oid"-words are foremost tied to robots, namely "android", "droid", "gynoid", "bioroid", and "plantoid". "Andr-" in "android" is taken from Greek "ἀνήρ" ("aner", "man"), so "android" means "shape of a man" and was first used in the 1728 Cyclopædia, or an Universal Dictionary of Arts and Sciences by Ephraim Chambers. Its partner is "gynoid", with "γυνή" ("gune") indicating a woman-shaped creature. Neither words inherently refer to robots or even simulacrums in general, but are often used so and concern themselves with the shape and the implications of the shape of the robot before anything else. As such, the two terms aren't fit for any robot with a shape outside a human binary setup, as the existence of "plantoid" shows, although "android" is often treated as a default. The term "droid", coined in 1952 by Mari Wolf along with "rob", is an adjustment of "android" and picked up by the Star Wars franchise as shape-non-specific term for its robots. "Bioroid", a contraction of "bio-" and "android", is a term occasionally used for organic robots.

Outside of these four, there are various terms for specific kinds of robots. In addition to "robotess" and "gynoid", the term "fembot", a contraction of "female" and "robot", exists. It was coined in 1976 by Arthur Rowe and Oliver Crawford in the television series The Bionic Woman. "Cyborg" dates from 1960 and was thought up by Manfred Clynes and Nathan S. Kline as a shortening for "cybernetic organism". It is used to refer to creatures that are part organic and part mechanical.

In ancient mythologies include artificial people, such as the mechanical servants built by the Greek god Hephaestus. Since circa 400 BCE, myths of Crete that were incorporated into Greek mythology include Talos, a man of bronze who guarded the Cretan island of Europa from pirates.

In Renaissance Italy, Leonardo da Vinci sketched plans for a humanoid robot around 1495. Da Vinci's notebooks, rediscovered in the 1950s, contained detailed drawings of a mechanical knight now known as Leonardo's robot, able to sit up, wave its arms and move its head and jaw. The design was probably based on anatomical research recorded in his Vitruvian Man. It is not known whether he attempted to build it.

In Japan, complex animal and human automata were built between the 17th to 19th centuries, with many described in the 18th century Karakuri zui (Illustrated Machinery, 1796). One such automaton was the karakuri ningyō, a mechanized puppet. Different variations of the karakuri existed: the Butai karakuri, which were used in theatre, the Zashiki karakuri, which were small and used in homes, and the Dashi karakuri which were used in religious festivals, where the puppets were used to perform reenactments of traditional myths and legends.

In France, between 1738 and 1739, Jacques de Vaucanson exhibited several life-sized automatons: a flute player, a pipe player and a duck. The mechanical duck could flap its wings, crane its neck, and swallow food from the exhibitor's hand, and it gave the illusion of digesting its food by excreting matter stored in a hidden compartment.

There are total of five robots in Monster High: Otto Maton, Robecca Steam, Captain Penny, Scareantino, and Elle Eedee. Both Hexiciah Steam and Sid Borg have robotic components, but are cyborgs. Otto and Elle function by electricity. Robecca, Dracubecca, Captain Penny, and Hexiciah are steam-powered. Scareantino is a clockwork-type robot. The only thing known about Sid is that he functions with the aid of pistons, so he's neither clockwork nor runs on electricity.

Robots also have free will and can express emotion.

There are a lot of, different kinds of robots. Most usually have a humanoid shape with the exception Captain Penny, who is an animal shaped robot. Robecca Steam is made out of bronze metal giving her a more bronze completion, while Elle Eedee is made out of a more silver metal. Otto Maton looks less human compared to the other robots. He has claws instead of hands, has three light bulbs around his head and has a less humanoid face, while Robecca and Elle have more human like faces. Scareantino has a turn key on his back to show how he's powered. Elle also has lines all over her body and around her face that are similar to faceplates, the lines on her face let out blue lights. Elle also has speakers for ears, and she has a power button on her forehead. 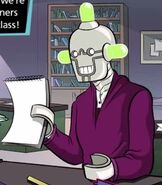 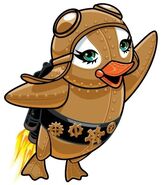 Captain Penny
Add a photo to this gallery

Retrieved from "https://monsterhigh.fandom.com/wiki/Robots?oldid=349678"
Community content is available under CC-BY-SA unless otherwise noted.