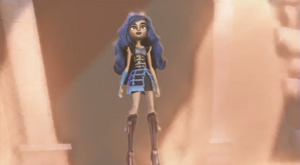 Robecca Steam debuted in the cartoon series in the Volume 3 TV special "Friday Night Frights". She is voiced by Julie Maddalena Kliewer in the English version of the cartoon.

When an invention of Ghoulia saps the electricity out of all the apparatuses on campus, Robecca teaches her fellow students ways to get by without it. They catch on quickly, but only care until they get their usual equipment working again. Robecca takes it in stride. Aba-Kiss Me Deadly Robecca attends the Boo Year's Eve party in the catacombs. Boo Year's Eve Robecca auditions for the part of lead dancer in an upcoming school play, but loses to Rochelle. Fright Dance Angry Ghouls

Frankie suggests she participate on the team, especially once the boys continue to say that ghouls don't play SKRM, however, Lagoona recollects a memory of a certain SKRM superstar... Robecca Steam! The first ghoul to play SKRM over 100 years ago. Despite this fact, the boys stick to their motto that Skultimate RollerMaze is for guys and they all leave the ghouls to fend for themselves, however, they team up together and vow to win, for Monster High!

Frankie and her friends deciding to take the place of the former team. Clawd mainly is surprised, due to his being the captain of the team. At first, he believes it to be a joke, although once he finds out that the girls are serious, he urges them not to play, despite their knowledge of Robecca Steam, who apparently, according to Clawd, got demolished and was never heard from again. Draculaura then tries to reason with him, but he refuses to listen, much to the dismay of most of the ghouls. Nonetheless, with Frankie's assurance and persuasion, the lot of them decide to still play, for the fate of their beloved school, however, the training they attempt to pursue is worthless, due to their little to no knowledge of the sport. Most of them can barely skate or follow the rules, although they try and do what they can. During this training, Ghoulia finds yet another piece of metal, this one a bit bigger than the previous and blue, she seems both confused and pondering over what it is. Apparently, part of the ghouls' training is to skate throughout the school and despite they're getting better, Frankie and Draculaura are still lacking in the art of it, still quite clumsy with it. This is noticed by many students, but Operetta mainly for some reason, who watches their every move and eventually daringly rescues them from crashing and getting injured. Upon this, Frankie offers the music diva if she wants to join the SKRM team, although Operetta refuses, claiming that she's not the type to join any kind of organized team sports, and she leaves the ghouls, not bothering to say anymore.

Robecca tells Clawd every team has a weakness; he just has to look for it. Clawd notices that Toralei is spying on the team's practice, so hints that they need to play up the discord. The next day Toralei tries to conspire with Operetta against the team.

Now the champions, they win back their crest, thus restoring the school from its dilapidated state. They are also entitled to Granite Highs crest, but Frankie realizing the futility of "traditions" especially ones that cause suffering to others, refuses to accept the crest since it will also cause Granite High to decay. Meanwhile, Ghoulia realizes that the trophy is actually Robecca's balance module. Manny and Heath battle for front row pictures of the new, but bump the trophy out of Clawd's hands. Clawdeen quickly moves to catch it, then Draculara realizes that Clawdeen may have faked her injury to allow her the opportunity to compete in the finals.

Like the rest of Monster High, Robecca is furious that New Salem High attacked their school. When Frankie and Abbey rescue Holt Hyde from his execution by the New Salem Sheriff and Police Department in the Trick-or-Treatment, Robecca helps them escape the pursuing police cruisers with her rockets and getting them back into the catacombs to lure the New Salem High students to the Hall of Halloween to restore the friendships between humans and monsters. Ghouls Rule

Robecca joins Dracualaura in returning to Transylvania when she is selected to be the next Vampire Queen by Prime Minister Lord Stoker. When Draculaura realizes that Elissabat was to be the next Queen, but she disappeared, taking the real Vampire's Heart with her, Robecca has this strange feeling that they are on the right track as they follow Elissabat's clues to Londoom, New Goreleans, and finally, Hauntlywood. When Veronica Von Vamp refuses to help them, Robecca believes Elissabat to still be nearby. Once Veronica reveals herself to be Elissabat all along, she reveals the Vampire's Heart to have been installed in Robecca herself by her father, Hexiciah Steam, to keep it safe after Elissabat entrusted it to him for safekeeping. That's what allowed Robecca and the others to find Elissabat as the Heart's energy was now a part of Robecca's systems. Robecca then joins the others as Draculaura gets her full vampire powers, and they attend the premiere of Elissabat's latest movie as Veronica Von Vamp. Frights, Camera, Action!

Robecca shares her thoughts with Draculaura on the latter's painting, which shows that it is mainly a picture of her (and Draculaura then tells her Robecca it's in there but she's just expressing "other" models, and says "Besides, the tonga sells it!") which Heath takes as an opening for him to come over and give his opinion on what a great model he is. Skelita tells him that art is serious business. Speaking dismissively of art itself, Heath returns to his seat, where another sneeze escapes him. This time, all the art pieces get burned. Weary and wary, the art students begin their work anew. As before, it doesn't take long before Heath shows signs of having to sneeze again, but this time Abbey freezes him before he can do harm.

All art pieces get finished in time, much to the relief and pride of their creators. The Board of Deaducation comes by to declare one the winner, which has everyone holding their breath in hopes their work get picked. The choice is unexpected: Heath Burns, as frozen in place, gets the blue ribbon. The art students take it in stride and leave, forgetting that Heath still needs to be freed. Eye of the Boo-holder

Robecca is among the friends tasked with performing Mr. Where's play on Monster High's history to celebrate the school's bicentennial. She is also among the friends who travel with Frankie back to 1814 and meet, unknown to them at the time, Frankie's grandfather, Victor Frankenstein, known by his nickname Sparky, and Hexiciah Steam, Robecca's father. Before they depart to return to 2014, Robecca leaves a message for her father. When Sparky damages the time portal before they jump in to return to 2014, due to having jumped in together with Draculaura, Robecca and Draculaura are accidentally fused together into the freaky fused hybrid, Dracubecca, with access to Robecca's hover boots, but a physical appearance of a cross between both ghouls in clothes, hair, everything. Avea Trotter tutors Dracubecca on how one of the personalities within her needs to take charge and be leader of their hybrid form, providing them an obstacle course to help them practice. Dracubecca soon becomes a prisoner of Sparky's Creation 4.0 when it attacks her and the other freaky fused hybrids of Frankie's friends. When Frankie uses her own life force to electrocute and deactivate Creation 4.0, Dracubecca is the last one of Frankie's friends to be freed and defused back into Draculaura and Robecca, but it fatally drains Frankie, and she dies soon after.

Together with the rest of Frankie's friends, Robecca uses the memories of the good times she's had with Frankie to revive her and bring her back from the dead. Before he returns to 1814 with Victor, Robecca gives Hexiciah a goodbye hug, adding on that she misses him already. Afterwards, they finish the play on Monster High's history, and welcome Avea and the other hybrids to Monster High with open arms. Freaky Fusion

TBA Casta Vote I Casta Spell On You Gloom and Bloom, Part 1

Heath jumps into Robecca's arms by being scared by her typewriter.

"It can do everything your fancy calculator can; only more fun if you ask me!

"I hope I have showed all of you that you don't need to be so dependent on technology..." 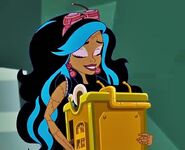 Robecca doesn't need a fancy laptop; her precious typewriter is just as good...

Robecca helps Rochelle to her place from getting off-balance. 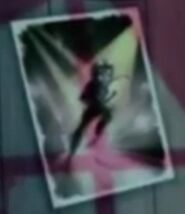 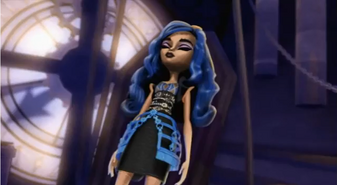 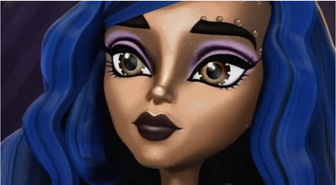 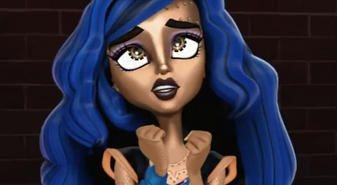 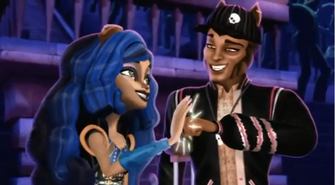 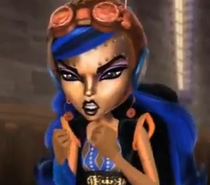 "Ooh, that really grinds my gears!" 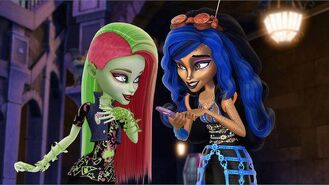 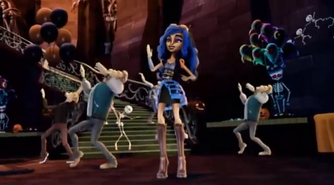 Our favorite robotic ghoul does the robot! 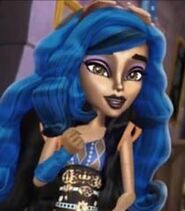 Add a photo to this gallery
Retrieved from "https://monsterhigh.fandom.com/wiki/Robecca_Steam/cartoon?oldid=348256"
Community content is available under CC-BY-SA unless otherwise noted.