Robecca Steam is a 2012-introduced and all-around character. She is a robot and a student at Monster High. Robecca was built at the end of the 19th century by Hexiciah Steam, a renowned mad scientist. In addition to being a legend on the SKRM track, Robecca is a professional stuntwoman who can impress any crowd. Due to missing out on a long period of technological progress, she holds aversion against modern devices. Nonetheless, if they can't be avoided, she adapts to them easily. Robecca only has three true weaknesses: patina, her inability to keep track of time, and the fact that she breaks down (not literally) when she misses her father.

She is voiced by Julie Maddalena Kliewer in English.

Robecca was first drafted in the year 1814, only to be built in the late 19th century, by Hexiciah Steam. When in possession of the antique relic that indicates the future vampire royalty, the Vampire Heart, given to him by the escapee soon to be queen Elissabat, Hexiciah thought it was best to incorporate it in Robecca's body, where he knew it would be safe. Frights, Camera, Action!

Invented as a teenager by default, Robecca lived with her father for at least 16 years, following him in his highly nomad life, traveling with him to expeditions and helping him in projects. One of her high points in life was her visit to Transylvania, where she came in contact with a variety of monsters, including the noble Vampire Court, but developed an existential crisis when she was outcasted for not being a "real" monster, artificially made rather than biologically.

Things didn't get better when, after settling in the Boonighted States of Scaremerica, her father mysteriously disappeared in an expedition to the catacombs after returning to his job as a teacher at Monster High. The two lost connection and this separation left Robecca completely devastated and miserable, finding her only consolation in rollerskating.

Robecca developed her career as a Skullimate Roller Maze (SKRM) athlete, being the first female to acquire this status in the history of SKRM, as well as one of the best. Unfortunately, during an event at a race, members of the opposing team cheated and dismantled her by consequence.

Dormant for a century, Robecca was built back again by Ghoulia Yelps and Frankie Stein, reacquiring her status in the SKRM world. Since her father is still missing, she has taken up residence at Kindergrubber's and enrolled at Monster High, as well as joining their SKRM team.

Robecca is a polite creature who makes sure to always stay proper and organized. Despite this, she is a lover of adrenaline and a monster of great strength, speed, and agility. As an avid athlete, she is also fair, and her experience in sports makes her warier of others' needs and faults, as she is also very observant.

Despite her struggle to take a pacifist route through things, she can get passionate and rather hot-headed when things don't go her way, to the point where steam literally comes of her ears. She usually vessels this passionate trait towards following human's (or monster's) rights. As the feminist she is, she is all about female empowerment and the inclusion of women in the social agenda, which highly influenced her decision to step outside the boundaries and venture into the world of SKRM, where she was extremely outnumbered by male athletes.

Aside from her fight for respect and eagerness to please, her mind is kind of a mess, ever since she was dismantled. Suppose she is missing a fully functional internal clock, which is always late, making her always arrive late to appointments, wasn't enough. In that case, her memory is also rather fragmented, making her forget major events in her life and only remember them as feelings of nostalgia, which she mostly doesn't recognize. She also has a clumsy streak in her.

Additionally, Robecca is a girl that lives in the past. Since she "grew up" in the early 20th century, she grew comfortable using what today is considered outdated equipment, resorting only to typewriters and candles over computers and electric light. She is simply more comfortable this way and cannot adapt to the newest gadgets, so she always goes the old-fashioned way. She doesn't seem too upset about being an orphan.

Robecca's "skin" is copper brown, with several patches, bolts, and rivets, including two gears on the backside of her calf. Her long wavy hair is black with blue streaks, and her eyes are copper-colored, with irises shaped like cogwheels. Her hair is sometimes tied in a ponytail. She has rocket boots and wears goggles. Her dress is blue and has brown diamonds at the top, with a bodice being black with gear designs and a black skirt with a blue metal skirt-like overlay. Over her dress is a black, sleeveless cardigan with bronze linen.

Robecca is a robot simulacrum created by a human being cyborg and is equipped with several gadgets that may come in handy. However, she is not a monster of many powers, which she replaces with her skill.

As a simulacrum, Robecca does not have family in the same way natural creatures have. However, she and her creator, a Mad Scientist by the name of Hexiciah Steam considered each other father and daughter.

After the disappearance of her father, Robecca came to live permanently with Kindergrubber, who's become an unofficial adoptive mother figure to Robecca and was the one that made her enroll at Monster High. Recently, Hoodude Voodoo has come to live under the same roof as them, but it's unknown how Robecca views him.

In her biography, Robecca mentions being friends with Rochelle Goyle and Frankie Stein. This may be because Robecca saved her life and because of the fact that Robecca had already met Frankie's parents and therefore naturally became her friend, or because of their relation as simulacrum. Robecca mentions in her diary that she found Draculaura to be a honorable and accommodating hostess, suggesting that they may be or were friends. Also, it has been seen in the 'Ghoulfriends' books that Rochelle Goyle and Venus McFlytrap are her best friends.

Additionally, Finnegan Wake's first diary entry mentions that he had been hanging out with Robecca at the Coffin Bean, suggesting that the two of them are friends out of a connection over their love of daredevil tricks.

Her pet is a mechanical penguin, named Captain Penny. Her bio states "Captain Penny is my mechanical penguin. Working wings are unnecessary when one is equipped with a rocket pack." In the Ghoulfriends Forever book, Penny is known to always be grumpy. Robecca mistakenly leaves Penny behind at times. Penny is in constant need of an oil change. 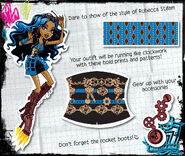 Robecca has such a killer sense of style! 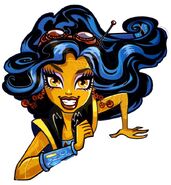 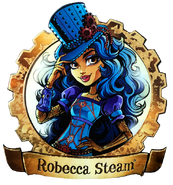 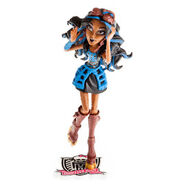 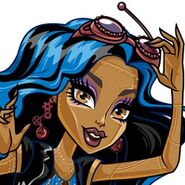