River Styxx is a 2014-introduced and all-around character. She is a reaper and a student at Haunted High. Although still in training, she is allowed to take over her father's duties whenever he has to be elsewhere for a while.

River Styxx is voiced in English by Ashley Peterson.

Unlike the traditional version of the Grim Reaper, River is extremely cheery, upbeat and bubbly, and loves bright colors and candy. She has a lot of energy and finds it hard to concentrate and stand still. Although, she does get feelings to scare other monsters, since she is a personification of mortality.

She loves to make people laugh and smile, and is always telling stories, planning parties and fun events for others, particularly the spirits she and her father transport to the Ghost World.

River is a Reaper In Training, (R.I.P) which means she is only allowed to carry a staff around instead of a scythe.

River has purple skin, which is transparent on her lower limbs so that her bones are visible. Her hair is blue, pink and purple. She has ghostly big blue eyes and, because she has both ghost and skeleton traits, visible lines on her mouth, to represent teeth, visible eye orbits and skeleton nose. She wears pastel goth clothes, and a black transparent cloak making her look more like a grim reaper.

River attends Haunted High, and is good friends with Vandala Doubloons, Porter Geiss, and Kiyomi Haunterly. She is also in good terms with Draculaura.

River's father is the Grim Reaper, one of many responsible for transporting passed on ghosts and spirits to the Ghost World. He has a hard time dealing with his daughter, who is not what a reaper is expected to be. As a result, he might be a little strict on her.

In her diary, she mentions her father has a cousin, a former reaper who broke the rules and was punished by being banished to the real world, and now works as a high school guidance counselor. It's implied this cousin is Mr. D'eath. River's uncle is Charon, the ferryman of the dead in Greek mythology.

River has a skeleton raven, Cawtion. Her pet's name is a pun mixture of play on words of the words: "caw", as a sound a bird makes, and the word "caution".

River is a Grim Reaper, a being from folklores and mythologies all around the world who is used to personify the concept of Death.  In Western culture especially the Grim Reaper is characterized as a skeletal figure in black robes and who carries a scythe while also having the wings of and/or an affinity for ravens. 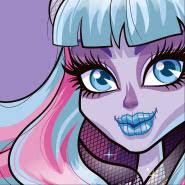 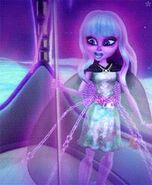 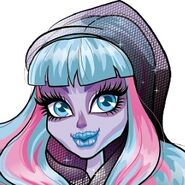 Retrieved from "https://monsterhigh.fandom.com/wiki/River_Styxx?oldid=346014"
Community content is available under CC-BY-SA unless otherwise noted.